Sand mandala to be made

Tibetan monks to create colorful image, to be wiped away at the end, at Ka‘ahumanu CenterKAHULUI, Hawaii -- Tibetan Buddhist monks will create a sand mandala as part of the Tibetan Cultural Fair at the Queen Ka'ahumanu Center from Tuesday to Jan. 18. 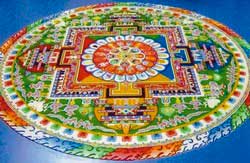 << Tibetan Buddhist monks will create a sand mandala, similar to the one shown, from Tuesday through Jan. 18 at Queen Ka‘ahumanu Center. The monks for five days will work on the sacred mandala and, by tradition, wipe it away at the end, with the sand given to the public. The creation and destruction of the mandala represent the impermanence of life and the ideal of nonattachment to the material world.

For five days, five monks from the Dzongkar Choede Monastery of Mysore, India, will construct a 7-by-7-foot medicine Buddha sand mandala on a flat wooden base. Maui residents will have an opportunity to watch the creation of the mandala, which will be wiped away by tradition with the sand given to the public.

Mandala, a sanskrit word that means "circle," is a sacred diagram created in sand or paint. To create a sand mandala, corrugated metal tubes are filled with grains of colored sand and then rubbed or gently tapped to release a tiny flow of sand as each part of the mandala is drawn. The exact proportions and all the details of the design are laid out in ancient Buddhist texts.

Sand mandalas traditionally are destroyed once completed, symbolizing the transience of life and the ideal of nonattachment to the material world.

The mandala to be created at the Queen Ka'ahumanu Center represents the residence of the medicine Buddha, the Buddha of healing. It symbolizes the pure, perfected universe and provides a visual framework for establishing feelings of peace, well-being and wholeness.

Composed of millions of grains of dyed sand, the mandala is believed to have a positive effect on all who see it as each particle personifies goodness.

The monks are on a cultural tour of the United States and Canada to share Tibetan art and ritual.

Dzongkar Choede Monas-tery is one of the oldest monasteries in Tibet. Established in western Tibet in 1270, the monastery emerged over time as one of the largest repositories of Tibetan folk and monastic art, music, dance, artifacts and spiritual training.

During the Chinese Communist cultural revolution, Tibet's Dzongkar Choede Mon-astery was razed and the monks forced to flee to exile. Construction of a new mon-astery began in the forests and farmlands of coastal south India near the Arabian Sea in 1972 under the auspices of the Dalai Lama and the government of India.

The fair will feature an exhibition of arts, crafts, displays, carpets and thangka paintings from Tibet, the tiny country high in the Himalayan mountains between India and China.

The creation of the mandala and exhibit of Tibetan culture will be open free to the public from 9 a.m. to 5 p.m. in the area near Ben Bridge Jeweler.

Contact the Tashi Pendey Foundation at 242-8704 or Monty Carpenter at 669-3000 for more information on the exhibit or to request additional activities during the monks' visit.
TOP