Kushanshahr: Where Zoroastrians and Buddhists meet

Los Angeles, CA (USA) -- The ancient north-eastern Iranian satrapies of Sogdiana, Bactriana, and Margiana have, until recently, been overlooked in terms of their place in the material and cultural trade that existed between “east” and “west,” “north and “south” from the beginning of the Common Era. 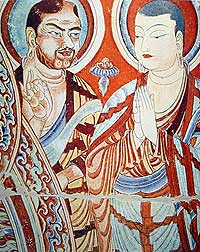 These three regions of modern Central Asia were the cradle of Zoroastrianism, and then became the conduit through which Buddhism spread from India to China.

This illustrated presentation will explore the development of Buddhism within the hellenistic-influenced Bactrian setting of the Kushan Empire, and the subsequent contribution of Sogdian Zoroastrian merchants to the dissemination of Buddhist texts and iconography along the Central Asian trading routes into China.

Jenny Rose is a historian of religion, with a particular interest in Zoroastrian Studies. She has an MA in Religious Studies from the University of London, where she studied with the late Prof. Mary Boyce. The focus of her MA thesis was the role of women in the Indian and Iranian Zoroastrian communities. In 1993, Jenny received her Ph.D. from Columbia University. An abbreviated version of her dissertation was published in 2000 under the title The Image of Zoroaster: The Persian Mage Through European Eyes.

Jenny continues to produce educational materials about the Zoroastrian religion for use in British schools, and has just been commissioned to write a new textbook Introduction to Zoroastrianism for use by a new generation of undergraduates and interested others!