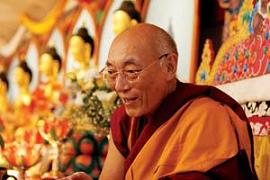 << The Venerable Choden Rinpoche will empower the Healing Buddha in a two-day ceremony in Sacramento this weekend.

Take, for example, the invitation to the upcoming Great Empowerment of Medicine Buddha ceremony sent out by Sacramento’s Lion’s Roar Dharma Center: “In Vajrayana Buddhism (Tantric Buddhism), one of the main paths of personal transformation and spiritual practice is that of Deity Yoga, where after receiving the empowerment (initiation) of a specific meditational deity (Yidam), and taking the associated vows, one engages in visualizing oneself as that Buddha.”

On June 13 and 14, Lion’s Roar will host the Empowerment ceremony at the Gedatsu Church of America. SN&R spoke to Lion’s Roar guiding teacher Lama Yeshe Jinpa to see what the Great Empowerment is all about.

“Basically, the ceremony is about creating an environment where people can heal,” explained Jinpa.

Jinpa said that during the two-day ceremony, attendees will actively participate in the healing process. Lion’s Roar invited the Venerable Choden Rinpoche to—in the lingo—transmit the Empowerment to people who participate on both days.

“The ceremony is teaching people how to do the visualizations, how to actually do the hand gestures, so that they totally experience themselves in the environment of healing,” explained Jinpa. Receiving the Empowerment involves meditation, chanting and listening to Rinpoche’s teaching. Those who don’t wish to receive the Empowerment can still attend and watch.

But exactly what kind of healing are we talking about?

The Empowerment shouldn’t be confused with faith healer Benny Hinn-like healing. “I really don’t want to say it’s a medical thing, because people will be showing up in their wheelchairs thinking they can walk. That’s not what we’re talking about,” said Jinpa. He admitted that said it was difficult to explain the ceremony to outsiders. “Our modern psychological sense of healing is so different than the traditional Buddhist way of healing,” he said.

“If you go into a room where people are happy and are glad to see you, it’s healing, right?” asked Jinpa. “That’s what the ceremony is about, creating an environment where people feel loved and accepted. There’s some ritual around that, but that’s the basic idea.”

Lion’s Roar Dharma Center has been around since 1994. They’re delighted that someone of Rinpoche’s stature will perform such a major ceremony.

Rinpoche was born in eastern Tibet in 1933. At age 3 he was dubbed the reincarnation of the previous Rinpoche, an honorific title meaning “precious one.” He spent several decades studying the monastic discipline. Rinpoche went into hiding after Tibet fell under Chinese rule, practicing in solitude from 1965 to 1985. He reportedly didn’t leave his tiny room for those 19 years. In 1985, Rinpoche escaped to India where he resumed teaching and began traveling to the West. He travels regularly around the world.

Jinpa said that each morning before the ceremony, Rinpoche will generate himself as Medicine Buddha in order to give the transmission. Once he has become the Medicine Buddha, he can then transmit the Empowerment to others. Again, says Jinpa, this might sound strange to newcomers.

“The whole point of Buddhism is to wake up; to become the Buddha,” explained Jinpa. “So you’re a Buddha. I’m a Buddha, too.”

Personal healing—whether mental, spiritual or physical—comes through changing perceptions and constructive visualization. And that’s a message Jinpa thinks anyone can appreciate. “People can come and just feed on whatever positive energy they get.”