The Monk Who Blogs to visit Nevada County 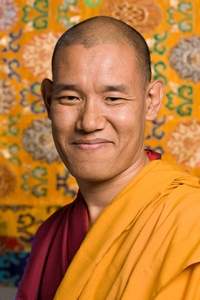 Khen Rinpoche Jangchup Choeden was appointed abbot by His Holiness the Dalai Lama of Tibet in 2009.

Khen Rinpoche was born in the north Indian State of Himachal Pradesh. In 1979, he joined the prestigious Gaden Shartse Norling University in Mundgod, Karnataka, India, and embarked on an extended course of Buddhist studies.

Rinpoche studied under guidance of the great masters and attended debate meetings and religious discourses at various renowned Tibetan Buddhist monastic universities across the Indian subcontinent.

In 1997 Rinpoche was awarded the prestigious degree of Geshe Lharampa, a degree often compared to a valedictorian PhD in western universities. Rinpoche subsequently joined the famed Gyuto Tantric University.

The abbots of the universities are selected and approved by His Holiness the 14th Dalai Lama himself. Abbots oversee all administrative and spiritual affairs of the entire college, including education, funds and religious affairs.

Rinpoche is fluent in English as well as five other languages and states that “by traveling abroad, meeting and exchanging views with people from diverse cultural, religious and social backgrounds, I enrich my own understanding of the meaning of life and common human problems. Being a graduate from a traditional Tibetan Buddhist academic system, speaking fluent English and Mandarin helps me greatly in assist people from diverse backgrounds through my counseling.”

Referred to as the "21st Century monk" because of his understanding of global issues, Rinpoche has an excellent command of technology, runs his own blog site, Facebook presence and website www.jangchupchoeden.org.

Rinpoche had briefly visited Nevada County in 2004 and was struck by the area's unique sense of community and long term commitment to the Tibetan culture.

“The Sierra Nevada is a place I will never forget in my life for its natural beauty and the kind, friendly and caring people. The love and friendship offered by all of you is irreplaceable by anything.” he says.

“We are so honored to receive the Abbot of the great Gaden Shartse monastery here in our little town. Unbelievable! For Rinpoche to make time for us in his demanding schedule is truly a testament to our community's continued loving support of this culture” says Melanie Sullivan of Sierra Friends of Tibet.