RICHMOND, CA (USA) -- Many men who grew up in Laos have stories of how they became a novice Buddhist monk, donning the orange robes and leaving family homes for the temple. 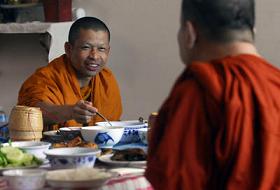 << Monks, including Bey Souvannarath, left, eat their last meal of the day before noon at the Wat Lao Rattanaram temple, in Richmond, Calif., on Wednesday, Feb. 10, 2010. (Dean Coppola/Staff)

They served for weeks, months or maybe years, but that was in another land. At the Wat Lao Rattanaram in downtown Richmond, children crowd the urban temple for monthly religious gatherings, but few of them will leap into the monkhood as their fathers or grandfathers did.

"Young people are losing interest in the religion," said temple board member Khammany Mathavongsy. "In Laos, the temple is the center of the entire community. Each village is named after the temple. But here, lifestyles have changed so much. People are working, people are busy, trying to build a career. They have less time to maintain the practice."

The loss of Lao traditions in the United States is a worry commonly expressed by elder members of the Theravada Buddhist temple in Richmond, but sometimes the next generation surprises them.

Mikey Vongthichack, 13, shaved his head when his uncle died three years ago and entered the Lao Rattanaram temple to spend several weeks living there as a novice monk. The Sacramento boy returns to Richmond with other youths every summer, learning Buddhist teachings and building merits to improve the life of his deceased uncle.

Four bhikkus, or fully ordained adult monks, live and pray at the Richmond temple. None, as lay members point out, listens to iPods or logs on to Facebook. Their simple life begins before dawn with chants and prayer and ends with prayer. They live by the 227 rules of the monastic order. They eat twice a day, but never after noon.

"When you get used to it, it's not very hard," Mikey said of his summers as a novice monk.

Still, the middle-schooler is quick to point out he has other plans once he grows up.

"I kind of want to have a family," he said. "I'll probably go to college, and after that, I'll probably stop being a monk, because I want to raise a family."

Mikey is following a trajectory that is rare among his American peers, but common in Laos, where young men are encouraged to temporarily join the clergy.

"Before you get married, you must spend some time in the monkhood," said Bounmy Somsanith, a former temple president. "In the olden days, when there was no school, young men learned from the monks about everything, from basic writing to basic speaking, how to survive."

The Pinole resident remembers his childhood foray into the spiritual life with fondness, though he also recalls it being difficult.

"When I was 15, I was a novice for three months," said Somsanith, a retired social worker and Alameda College math instructor. "It was hard. You have two meals a day. You have to wake up early to clean the yard of the temple. To go out fetching for food, begging for food."

Sal Phoummala was a monk for much longer, until he was 32 years old. He gave it up before he moved to the United States in 1980.

Adults monks are revered in Laos. They are revered, too, at the Wat Lao Rattanaram, which attracts hundreds of lay members from across the East Bay and beyond.

Some of the members, both men and women, many retirees, stay at the temple overnight for short spiritual retreats.

"They just roll out a mat and sleep on the floor," Mathavongsy said. "It's temporary, for a day or two, then they clean up and they leave. They stress simplicity, not luxury. Their goal is to obtain enlightenment."

Each morning by 11, a mostly gray-haired group of congregants arrives at the Barrett Avenue temple with bowls of sticky rice and freshly cooked vegetables and meat — sometimes even a pizza. These daily alms are the sustenance for the monks, who cannot cook themselves because of their beliefs.

The four robed men sit on the floor around a long table and chat quietly as they eat their last meal of the day.

The youngest monk, Bey Souvannarath, stands out, though he tries his best not to. He is the only monk who grew up in the schools and streets of Richmond and the only one ordained in the Richmond temple and not in Laos. The 32-year-old came to the clergy after considering the Navy.

Souvannarath and the other monks all declined formal interviews, but temple leaders say Souvannarath has become a role model who helps guide young Lao-Americans away from gangs, drugs and other temptations of modern life.

Northern California remains the hub of America's ethnic Lao immigrants, many of whom fled their homeland after the Communist Pathet Lao took over the government in 1975. Community members see the Richmond temple, which opened in 2004, as a symbol of how far they have come.

Somsanith and his family members were among about 20 Lao families who lived in a three-story apartment complex east of Oakland's Lake Merritt in the late 1970s and early 1980s. A Lao temple was founded on 12th Street in West Oakland a few years after he arrived.

"Our people were homesick," Somsanith said. "They didn't know where to go, what to do. They didn't speak the language. They didn't have a place to worship."

That temple, though cramped, served its purpose for more than two decades until the community bought a Richmond church for $1.2 million and began converting it to make it a place of worship for the Theravada tradition of Buddhism. Compared to the Oakland venue, the 6-year-old temple is spacious and ornate, with murals, statues and red-and-gold moldings modeled after ancient temple designs from the holy city of Luang Prabang.

"We remodel every day," Somsanith said.

Now settled in a comfortable space, members said the challenge is maintaining interest in temple life as the immigrant generation grows older. The number of monks is down to four from six after some left for the Central Valley and Laos. Monk Souvannarath has helped the institution connect with younger members, but the pull of technology, work and other distractions is strong.

"We're adapting to the change," Mathavongsy said. "We're still new — one of the youngest Asian Buddhist communities in this area. It's only been 25, 30 years since our community moved here through the refugee experience. Hopefully, we will survive in the next generation."

Buddhism arrived in Laos more than 1,200 years ago. The most prevalent tradition is Theravada Buddhism, one of the oldest branches of the religion, which is also predominant in Sri Lanka, Cambodia, Myanmar and Thailand. Ancient spirit beliefs coexist with Buddhist precepts in Laos.

Monks play an important part in religion and society. Historically, most Lao men have spent at least a short period of their lives as novice members of the monastic order. Boys, usually after their eighth year but sometimes at a younger age, become novice monks who spend their days in prayer, learning Buddhist scripture, fasting after lunch and doing chores. Becoming a novice, even for just a few days or weeks, builds character and earns spiritual merit for the novice and his family.

The monkhood has also been a way for youths, especially those from the countryside, to get an education. The number of young men pursuing the monkhood has declined in recent decades with the growth of public education.

At 20, a man can become a fully ordained Buddhist monk, which involves a life of prayer, abiding by 227 precepts and leading religious ceremonies for the lay public. Some women become nuns, but that is less common.

Some of these traditions have persevered in the United States at places such as the Wat Lao Rattanaram, a Buddhist temple in Richmond that is home to four fully ordained monks, all of them born in Laos.
The temple, at 2417 Barrett Ave., is one of three Lao Buddhist temples in the Bay Area. The others are in San Jose and Santa Rosa, and there are more in Stockton, Sacramento and elsewhere in the Central Valley.
Source: Center for Lao Studies in San Francisco