SANTA ANA, CA (USA) -- The scent of incense wafts through the air as monks, clad in bright yellow, chant into a microphone. Behind them, a giant statue of Buddha gazes out through the rain into the neighborhood. 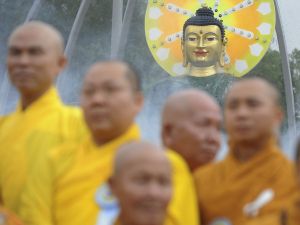 << Buddhist Monks line up in front of the Jade Buddha for Universal Peace, a 4.5-ton statue made of rare, dark jade carved out of a giant bolder discovered 10 years ago in Canada. It is touring temples throughout Asia, Australia and now the United States.
MINDY SCHAUER, THE ORANGE COUNTY REGISTER

Thousands of people came from all over Orange County to see the 4.5-ton Jade Buddha for Universal Peace, a statue carved from a single piece of translucent jade. The statue is visiting the Bat Nha Buddhist Temple, 803 S. Sullivan St., through Oct. 31.

The Jade Buddha sits inside a metal cage fashioned like a lotus flower. The Bat Nha Buddhist Temple built the ornate statue covering using donations of more than $50,000.

Thousands of people push forward to get a better look as the two side 'petals' of the cage slowly open. People gasp, clasp their hands in prayer or grab their cameras and their iPhones as the center petal begins to move forward, revealing the Jade Buddha.

"Most people come to worship the Jade Buddha and right away they feel relaxed, peace and contentment inside the body," said The Most Venerable Thich Nguyen Tri of Bat Nha Buddhist Temple.

The lotus flower is a symbol of purity, said Temple volunteer and Irvine resident Nhan Phan. The lotus flower smells good and is pure white, though it grows out of the mud, he said.

"It's analogous to your heart. It's always pure, no matter your surroundings," Phan said.

During the ceremony, officials released doves to fly over the statue. Fresh flowers decorated the viewing areas and the throne the Buddha rests on.

"It's emotional because Buddha brings peace to the world, because right now there's fighting, war, earthquakes, gangsters and the water rising," said Hue Houng, a volunteer from a temple in Long Beach. "The Buddha is here to help us. When I see the Jade Buddha come here, I'm so happy, tears come out," she said.

"Vietnam has a history of war and tragedy so something like this brings people together," said Dong Chau, of Bat Nha Buddhist Temple.

Katie Tran of Fullerton made a trip to San Diego County to visit the Jade Buddha in Escondido. The Buddha also has visited San Jose and Sacramento and will travel to Huntington Beach in November. The statue has already been displayed in Florida, Tennessee, North Carolina, Massachusetts, Virginia, Washington state, and Oregon.

The Jade Buddha is 8 feet high and sits on a 4-foot-high throne. The statue was modeled after the Mahabodhi Stupa in India and was carved from the world's largest translucent jade boulder, discovered in Canada in 2000. Ian and Judy Green commissioned the statue, which was finished in 2008 and consecrated by the Dalai Lama in 2009. The statue is valued at about $5 million.

The Jade Buddha began touring in March 2009, starting in Vietnam. The statue made its first appearance in the United States in February.