PASADENA, CA (USA) -- For five days, five Tibetan Buddhist monks will hunch over a table, holding their breath as they place grains of brilliantly dyed river sand to create a sacred mandala. 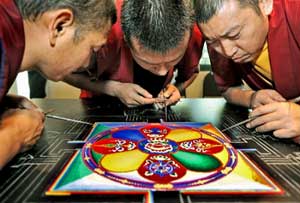 << Venerable Thupten Nima, left, Venerable Lobsang Dhonyoe, Venerable Longsang Tsetan drawing of the lines in Mandala painting at Pacific Asia Museum in Pasadena Thursday, November 4, 2010. Five visiting monks from the Drepung Loseling Phukhank Khangtsen Monastery in southern India are at the Pacific Asia Museum to create a sand mandala, and will complete it by 1 p.m. Sunday and at 2 p.m the mandala will be swept away.(SGVN/Staff Photo by Walt Mancini)

At 1 p.m. Sunday at the Pacific Asia Museum, 46 N. Los Robles Ave., they will put the last hand-ground grain in the mandala's intricate pattern symbolizing compassion, enlightenment and the world in its divine form.

"That's the message in it," said Lobsang Dhonyoe, a 32-year-old monk from the Drepung Loseling Phukhang Khangsteen Monastery in Southern India. "Nothing is forever."

Speaking through translator Tenzin Sherab, Dhonyoe said the monks never have the feeling they want to make their painstaking work permanent.

"It's like flowers, or people," he said. "One day, everything will die."

The monks, who are on a three-and-a-half month tour of the Western U.S., are from a monastery founded 500 years ago in Lhasa, Tibet, then re-established in Mundgod, India, in 1976 with help from the Dalai Lama.

Sherab said visitors are welcome to watch the monks work from 10:30 a.m. to 3:30 p.m. daily, free of charge, and return to watch the mandala progress.

On Sunday, at the "Dissolution Ceremony," the mandala will be blessed a final time and swept into a pile. According to tradition, some of the sand will be given to visitors as a blessing for their homes or gardens and the rest will be returned to the ocean.

The monks never get nervous having an audience watch the painstaking process, Dhonyoe said, and their meditation skills allow them to control their breathing and concentrate for long periods.

"Sneezing is far away," Sherab joked.

With forearms and wrists steadied on small cushions, the monks' lean inches away from the fine sand they are placing and layering on the outlined map. The sand flow from the narrow tapering end of a long metal scoop is controlled with taps from a metal rod, and no one is breathing as the elaborate pattern takes shape.

Katherine Murray-Morse, the Pacific Asia's interim executive director, said this is the first visit by monks from this monastery, famed for its monks' skill in the Tibetan Buddhist art of sand mandala.

Olivia Garfield of Pasadena, with her mother - also Olivia Garfield - visiting from New Hampshire, were fascinated by the mandala's progress Thursday.

"They just spend so much time doing it - and then, oh, just throw it away?" the elder Garfield said.

A mandala is so colorful and precise that it can look a little unreal - as the monks found out in their recent visit to San Jose.

"We were having lunch, and we'd put barriers around" the mandala, Sherab said. "One lady was watching the mandala. We thought it was fine, and all of a sudden she pushed her finger over it. Luckily it was the first day."

The monks "just laughed," Sherab said, "but I yelled at her...she said she was sorry."