Winnipeg, Canada -- Is Shin Buddhism - a version of this ancient faith practised in Japan -- a good religion for Canadians? Jeff Wilson thinks it is. 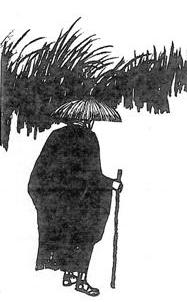 Wilson, a Shin Buddhist convert and author of the book Buddhism of the Heart: Reflections on Shin Buddhism and Inner Togetherness, believes it's a good fit for people wanting a flexible, non-judgmental and accepting form of spirituality.

"Most religions ask you to be something other than who and what you are," he says. "They want you to become holy or pure or good enough to qualify to enter heaven or whatever ultimate goal it is that they hold out in front of the believer."

The problem with that approach is "we are not in fact really all that good. We may try, but life is hard and we are weak, and few people can measure up to the standards set by religion."

Shin Buddhism, on the other hand, accepts people "as they are, warts and all, whoever and whatever they are," he says. "There's no need to become holy, something not many of us are able to do, anyway."

Wilson, 35, grew up Unitarian, but as a young adult was attracted to meditation -- the style of Buddhism best known by westerners. But instead of helping him achieve the Buddhist goal of being more detached from the self, mediation made him more attached.

"I became prideful of my ability to sit still and mediate for a long time," he says. "It made me a worse person -- I ended up focusing on myself, not on others."

He turned to Shin Buddhism, which some describe as a "spiritual path for busy people who have hefty work schedules and families to take care of."

Founded in Japan 800 years ago, Wilson says there are four key characteristics of Shin Buddhism that make it appealing for people today: Relaxing, trusting, thanking and fearlessness.

Relaxing, he says, means "an emphasis on being who we are, and on naturalness instead of striving," he says.

Trusting means "cultivating a vision of our inner togetherness and turning toward power beyond the self."

Thanking means "living an expressive Buddhist life of gratitude that puts our inner feelings into action in the world."

And fearlessness means living "without anxiety, which provides hope and courage in a difficult world."

For him, "this is a beautiful vision of the spiritual life, where instead of chasing after enlightenment and holiness, we rest in boundless compassion and allow our joy to grow ever fuller, where we are compelled by gratitude rather than fear, greed or obligation."

But if it's such a great religion for Canadians, why do so few know anything about it?

"It's partly our own fault," says Wilson, noting that Shin Buddhismbegan in Japan, and for nearly all of its history it stayed there. As a result, it has no missionary history, like other forms of Buddhism, and adherents "never really learned how to master outreach activities."

Decades of persecution and racism against Japanese Canadians, including the forced relocation from B.C. to other parts of the country during the Second World War, also made Shin Buddhists in Canada reluctant to share their beliefs. "It became natural to look inwards, to try to stay out of sight," Wilson says.

The result? If Canadians know about Shin Buddhism at all, they see it as an ethnic religion only for people of Japanese descent.

Wilson wants to change that. "We need to be more outward focused," he says, expressing the hope that Shin Buddhism could move from "being a Japanese to a Canadian religion, or perhaps even a universal one."

Will that happen? It seems like a steep climb. But it's happened before. Seventy years ago, Mennonite churches in Canada were viewed in a similar way. Few non-Mennonites would have considered joining; they were viewed as being only for people of Germanic descent.

Today, the opposite is true. Many Mennonite church members come from a variety of ethnic backgrounds. And not only that, the church has grown in other countries, too -- there are more Mennonites in the Democratic Republic of Congo and India than there are in Canada.

Could that happen to Shin Buddhism, too? Wilson hopes so. After all, he notes, "I didn't grow up in this tradition. But it's fair to say that it has probably been the single greatest influence on my development into the person I am today."

Wilson will be at the Manitoba Buddhist Temple, 39 Tecumseh St.,tonight at 7 p.m., talking about Buddhism of the Heart. Admission is free.