A day in the life of the Phap Van Buddhist temple

Mississauga, ON (Canada) -- For years I’ve wondered what goes on behind the doors of a Buddhist temple. What are the monks like? What do they do? The Phap Van Buddhist temple and Cultural Centre, at 490 Traders Blvd. E., near Kennedy Road and Britannia, in Mississauga, helped me answer these questions. 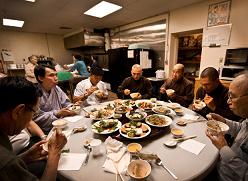 Built in June 2000, the temple services the needs of west end Vietnamese Buddhist worshippers and, in May 2010, hosted the four-ton, $5-million Jade Buddha for Universal Peace, one of the few stops it made in Canada on its four-year world tour to promote peace. Recently, I visited to experience life behind those doors on an average day.

9 A.M.  The TV is tuned to a European soccer match when the door opens to the monks’ lounge. The Abbot Venerable Thich Tam Hoa checks messages on his cell, the others captivated by the match. Not what I had expected, to say the least.
As I enter, my host Dao Tran introduces me to the three monks in turn; the Venerables Nhat Quan and Tri Thanh and the Abbot Venenerable Thich Tam Hoa. We are in a small room, maybe 12-by-12 feet, with a fridge and a sink area. Plates of fresh fruit, roasted corn and peanuts are out on a coffee table, with a fresh pot of green tea steaming. Aside from the TV, very basic and humble.

“We have a full day today,” Dao beams, “very busy.” In addition to the regular Sunday mass, there are two services and a ceremony at a local funeral home to attend. Here, Mahayana Buddhism is practiced, the branch of the religion found throughout East Asia, which includes the traditions of Tibetan Buddhism. “The most obvious difference” between theirs and other forms, Tam Hoa counsels, “is that we are vegetarian and eat no meat or fish.”

The monks’ daily duties vary with rank. Abbot Venenerable Thich Tam Hoa (most use the more familiar Master Tam Hoa) welcomes visitors, advises people on various — mostly spiritual — matters, comforts people or families who have lost loved ones, prepares lessons to lecture after Sunday mass and attends meetings with other Buddhist organizations, amongst other functions. The other monks are responsible for gardening, cleaning, cooking, attending funerals and burials with Master Tam Hoa, visiting patients in hospital and conducting monthly retreat sessions. The three monks live and work here, as is traditional within the Buddhist doctrine.

9:30 A.M.  The monks ready for the 10 a.m. service, donning their ceremonial burnt orange robes. An intricate fold here, a tuck and a soft draping there. One of the volunteers, Frankie, draped in a light grey tunic, rings the Majestic or Great Bell, striking it three times with a large pendulum-like object called the Bat. Standing more than a metre tall and weighing at 800 kilograms, the bell produces a booming yet comforting sound, and signals the congregation to prepare for the first mass.

Typical of many centres, the Phap Van Temple houses the Main Hall for worship, as well as additional rooms, out-buildings or distinct areas. The Second Hall — adjacent to the Main Hall — is used to display pictures of the deceased, whose families congregate at the temple to pay their respects. The Queen Yum Tower is located outside the main building, and members of the temple venerate Queen Yum The Saver by placing small Queen Yum statuettes inside it. Beside it is the Queen Yum Gardens — complete with a fountain and an outdoor shrine to Queen Yum. Also outside is the Memorial Tower where families temporarily keep their loved ones’ ashes before burial. In addition, the main building basement houses an auditorium for cultural events such as the Lunar New Year celebration. Annexed to this auditorium is a kitchen and food preparation area that can supply meals for more than 100 people. This is where the monks prepare their own meals weekdays. Today, take-home meals are being prepared for the people coming to the temple to attend services.

10 A.M.  The Sunday morning mass to honour the deceased is attended by more than 50 worshippers, and takes place in the Main Hall. After the congregation has settled, kneeling on their cushions, the monks enter and take their spots on the dais under the watchful eye of the large statue of Buddah. The service consists of chanting and singing, led by Master Tam Hoa. The repetitive chanting produces an almost hypnotic atmosphere. As this service ends, some of the congregation file silently into the adjoining hall for the second of two services being held today to honour their dead. They are joined by others who come in directly upon arrival at the Temple; like everyone else, their shoes left outside the door.

11 A.M.  At this second service, a number of people don white ribbons, worn like a bandana around their foreheads. While some had these on at the earlier service, most do now. Custom is that these are worn over a period of 49 days to honour the deceased. Today, Master Tam Hoa and his monks lead the service for seven families and to honour an Abbot from Vietnam who has passed away. Pictures of the deceased are displayed front and centre. Beside the pictures, food (prepared by the temple) and tea are set out formally to honour the dead. Buddhists believe in reincarnation, and part of the prayer from Master Tam Hoa asks that they be reincarnated in human form and not as an animal or in an evil form of any sort.

NOON  Break time. The monks change back into their greys. Thanh heads outside for a break, sitting near the Memorial Tower talking with two volunteers who are cleaning out the interiors of their cars. Shortly, he retreats to the basement to join the other monks and Dao, who are in the kitchen area. A few volunteers join the table. On the menu: handmade vegetarian wraps, a hot noodle soup, vegetable dumplings, tofu dishes and a chilled custard. Other than the monks being first seated, there is neither formality nor pecking order here.

1 P.M.  Back to the monks’ lounge for yet another soccer match on the television. While many temple members come and go, Thanh is constant in his vigilance of the game, and is joined by two younger volunteers, cheering a good play and sighing a near miss. It nears 2 p.m., and the monks undergo another wardrobe change, getting back into the orange robes.

2 P.M.  To the uninitiated, Sunday mass is a carbon copy of the morning session, but with more people in attendance — this time to pray for everyone, living and dead, and for peace around the world and in one’s own life. The monks enter, everyone stands, bows and kneels a few times in succession, and the service begins.

3 P.M.  When the formal part of the mass ends, Master Tam Hoa delivers his Sunday lessons, today’s on living a good and purposeful life. Everyone listens attentively. Partway through, the buzz of a cellphone on vibrate can be heard, the owner quickly silencing the gadget and smiling, embarrassed, at her friend. The young women giggle quietly. Master Tam Hoa continues without pause.

4 P.M.  The last service over, Master Tam Hoa returns to the lounge to prepare for the last item of the day: presiding over a service at a local funeral home. The monks wear brown robes to travel, and pack orange robes for the service. Climbing into a minivan, they head to the service, a 10-minute drive away.

4:30 P.M.  Family and friends gather. Grief and sadness in the air, the staff guide everyone into the chapel where the service will take place. In another room down the hall, Master Tam Hoa, Quan and Thanh don their ceremonial robes and join other attending monks in the hall outside the chapel.

5 P.M.  With Master Tam Hoa in the lead, the procession heads to the front of the chapel. Under a large flat screen TV showing photos of the deceased, he leads the service. In prayer, it is explained to the congregation that death doesn’t mean the end. As Dao translates: “It is like a changing state, like getting rid of something too old, for something new and fresh.” After the service, Master Tam Hoa comforts family members. A full day’s work done, the monks change wardrobes again in preparation for their trip back to the temple where they’ll get dinner and have time for prayer, meditation and reflection — and perhaps to catch the soccer scores on TV.