Manitoba, Canada -- After more than a decade of sermons, speeches and television appearances, the city's most public Buddhist is becoming a little more enlightened about the prospect of retirement. 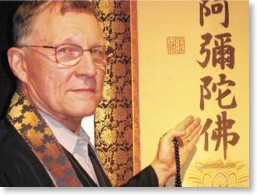 "I wanted to work until (age) 80, but I figured if I worked too long I wouldn't enjoy my retirement," explains Sensei Fredrich Ulrich of the Manitoba Buddhist Temple.

Ulrich officially ended 14 years of preaching and teaching duties at the end of 2013, but admits he hasn't quite adapted to the rhythm of the next chapter of his life.

"I don't think I'll ever stop (working) but it will be in a different key signature," says the Nebraska native, who plans to write a book and visit other Winnipeg Buddhist groups now that he's freed from regular responsibilities at the temple.

Born into a German-Metis family, the 74-year-old Ulrich originally trained as a Methodist minister before going on to become a teacher. Still affirming the Christian principle of love, he turned to a broader expression of faith, exploring his aboriginal heritage as well as studying Buddhism for many years, and eventually became ordained as a Buddhist priest in the Jodo Shinshu tradition.

"I had these spiritual experiences that didn't jive with what they were teaching" at the seminary, explains Ulrich, father of four adult children, including a daughter who is a United Church minister in Edmonton.

That intersection of faiths has intrigued him ever since, and he's proud of his work with his congregation -- called sangha in Sanskrit -- as well as his efforts in the community to create a better understanding of Buddhism beyond the stereotypes of chanting saffron robe clad monks.

"I think the core of my work in Winnipeg was interfaith as well as helping this church transfer from being an ethnic (Japanese) church to a Canadian church," says Ulrich, who is the first non-Japanese sensei at the temple, founded more than six decades ago by Japanese-Canadians interned in the Second World War.

Ulrich has been successful on both counts, expanding the profile of the temple in the community, and attracting newcomers interested in exploring Buddhism, says board member Harvey Kaita, whose grandparents were among the founders of the temple in 1946.

"He has single-handedly made the Manitoba Buddhist Temple get known out there, so now we have more non-Japanese attending than Japanese," says Kaita.

That intersection of cultures has led to more mixed marriages, and more accommodation of other faith traditions, says Ulrich, who believes people can develop skills to live as interfaith families.

For two seasons Ulrich also explained the tenets and practices of Buddhism to viewers of Joy TV, now the religious broadcaster Hope TV.

The temple plans to honour Ulrich's work with a nine-course dinner on Saturday, Feb. 22

"Everything he believes and values really resonates with us," says Kaita of Ulrich's work.

"There was a strong connection there."