Ontario, Canada -- The Cham Shan temple project on the Oak Ridges Moraine in rural eastern Ontario is a massive network of four proposed Buddhist temples linked by pilgrimage trails to symbolize the four sacred Chinese mountains, each representing a Bodhisattva, or enlightened one. 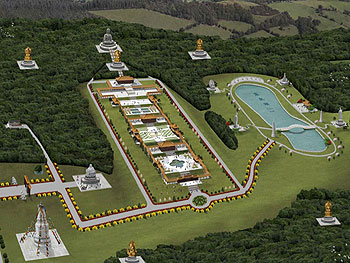 << Plans are in place for the Four Sacred Buddhist Mountains temple in Ontario. A planned wind turbine farm is causing controversy because of its proximity to the retreat.

Only the first temple has started construction, but already the entire $40-million project has been cast into doubt, following the Ontario government’s approval in December of a windfarm right in the middle of the pilgrimage zone, close enough to spoil the meditative vibe.

The dispute, which pits Buddhists against Ontario Liberals, and green energy entrepreneurs against rural landowners, is to be fought in an environmental review tribunal that is to deal with motions Wednesday, in anticipation of hearing evidence next week.

Ontario aims to take 10% of its electricity from wind by 2030, but the path to that goal is not clear. To a battle already clouded by concerns about health, wildlife and property values, this fight adds the curious but not unprecedented issue of “infrasound,” and its negative effects on concentration and meditation.

Already, the fight has drawn the intervention of a federal cabinet minister.

“This is unbelievable,” Employment and Social Development Minister Jason Kenney, famous for his political outreach to religious and cultural minorities, wrote on Twitter Saturday. “They’re investing decades and millions to build this beautiful retreat. To be ruined by turbines? … Silence is their [Buddhists'] raison d’être.”

It is not obvious Mr. Kenney can do much about this provincial matter, but the fight might have a federal aspect, as there are complaints of lack of consultation from two local First Nations.

Mr. Kenney was responding to former York Region Police Chief Armand La Barge, who lives nearby in the Kawartha Lakes area, and says the Ontario government is “trampling the rights of rural Ontarians” by approving wind farms over local objections.

“Suddenly, ordinary citizens, people that have worked hard to protect this very important feature [the Oak Ridges Moraine, known as Ontario's rain barrel] are fighting their own government to try to save the Oak Ridges Moraine from what I think is a disastrous policy,” Mr. La Barge said. “How do you upset the Buddhist community?”

Meditation aside, he fears the turbines will affect “the ability to enjoy your property, the sheer ability to sit outside. Remember this is a 747 turned on its side that’s rotating.”