City of Vernon, BC (Canada) -- The Vernon Buddhist Temple is hosting the BC Jodo Shinshu Buddist Temple Federation’s 60th Anniversary Convention and AGM Saturday and Sunday at the Village Green Hotel. 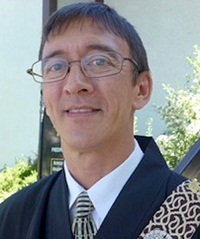 << Rev. Michael Hayashi is one of the featured speakers at the BC Jodo Shinshu Buddist Temple Federation’s 60th Anniversary Convention and AGM, taking place Sept. 20 and 21 at the Village Green Hotel and hosted by the Vernon Buddhist Temple, with the theme of “Interdependence.”

The gathering will bring together ministers and members from all of the B.C. temples including Vancouver, Steveston, Kamloops, Kelowna, Fraser Valley and Vernon.  The theme of the convention is “Interdependence.”  The Saturday program, which is open to the public, will feature guest speakers from quite  different backgrounds.

At 10 am., Rev. Michael Hayashi, resident minister of the Manitoba Jodo Shinshu Buddhist Temple, will speak on “Buddhism and Interdependence.”

The father of three teenage sons, Hayashi is a graduate of Lakehead University, with a bachelor’s degree in English and education. He also attended Ryukoku University in Kyoto, Japan graduating with a master of arts in Jodo Shinshu Theology.

Next on the agenda, at 11:15 a.m., is Huguette Allen, a past federal candidate for the Green Party, more recently director of the Sustainable Environmental Network Society, and co-founder of both the Friends of Responsible Ecological Sustainable Timber and Sugar Lake and the Middle Shuswap Stewards. Allen will speak on “Interdependence and Our Environment.”

Allen is a well-known advocate for the environment who continues to be active in the Okanagan region, working tirelessly on issues dealing with species at risk and many other environmental concerns.

Allen’s environmental awakening occurred 30 years ago when she realized that the lake she lived near was contaminated by heavy metals from industries that she herself had once encouraged. This led her to the realization that the socio-economic world in which she lived encouraged lifestyles that were bound to be destructive in the long term. She started looking for solutions that would contribute to building a healthier world for future generations.

At 1:45 p.m., Hayashi continues his presentation on “Buddhism and Interdependence.”

And at 3:15 p.m., Ray Negrin, a corrections professional with more than 30 years of experience with BC Corrections Service, will make a presentation, “Am I My Brother’s Keeper.”

Negrin, a father and member of the Vernon Buddhist Temple, begin his career in corrections in 1967 at Oakalla Prison. In 1990, he began work as director of programs and services at the new Surrey Pretrial Centre, where he was responsible for the delivery of services in health care, counselling, religious services, native programs and food services.

During his career, Negrin has worked with Young Offenders, in Remand, served as both a deputy warden and warden and been responsible to develop and administer all manner of programs including health and religious services to Native Brotherhood Programs.