EDMONTON, Canada -- A Buddhist monastery in central Edmonton will hold a special prayer ceremony Sunday morning for the victims of this week’s mass murder. 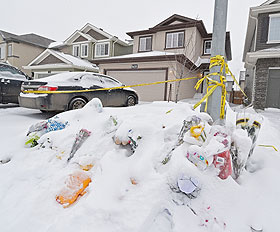 << A memorial in front of the house at 18028 83 St. where the bodies of seven murdered people were found.
Photograph by: John Lucas , Edmonton Journal

The Truc Lam Monastery’s regular Sunday service will include a blessing for the eight people killed by gunman Phu Lam.

“This kind of thing will support and comfort the family. They know that the community is always beside them,” said Chief Abbot Phap Hoa.

He said he expects many friends and members of the Vietnamese community to attend, in addition to the 100 regular attendees. The temple is located at 11328 97th Street.

The service starts at 10:30 a.m. and lasts about 40 minutes. It includes a short talk and prayer.

“Right now, what we can do is to help the victims so they can rest in peace and help the family who is still alive to comfort them and try to support them as much as we can,” Hoa said.

Hoa will also be helping plan a funeral for the victims.

On Friday, police identified Lam as the killer and released the names of the seven victims he shot inside a north end home. They are Lam’s wife, Tien Truong, 35, and her eight-year-old son, Elvis Lam; her father Dang Truong, 55; her mother, Dau Le, 55; her sister, Ha Truong, 33; her sister’s daughter, Valentina Nguyen, 3; and her friend Viet Nguyen, 41. Cyndi Duong, 37, was killed by Lam at a home in southwest Edmonton.