'A place for anyone and everyone': Buddhist monks expand to Charlottetown 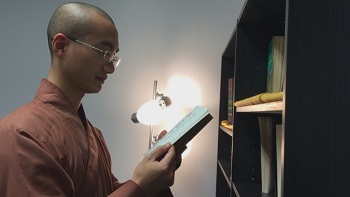 The Great Enlightenment Buddhist Institute Society has run a private monastery out of Little Sands, near Montague, since 2008, but this is the group's first permanent, public building on the Island.
Interest in Buddhism growing

"Instead of going to the private retreat place in Little Sands," said Yang. "Even though it's only 40 minutes away from Charlottetown, we feel like a location like this {new one} actually makes more sense."

It's called GEBIS Charlottetown: a Buddhist Centre. According to Yang, there was so much interest in the monks from the public, the group decided to expand to P.E.I.'s capital city. The new location opened November 1st, and is already offering free courses in Buddhism, taught by monks.

"We are also planning for sitting meditation courses," said Yang. "Buddhist monks will come over here to go over guiding principles and how meditation can actually help us in terms of stress reduction, making us happier, and to attain peace of mind."
A 'community hub' for Island Buddhists

Until now, Islanders with an interest in Buddhism were taking GEBIS courses held at UPEI or The Murphy Centre. For Michael Gaudet, who has been a part of the Island Buddhist community for several years now, it's nice to have a permanent space.

"We had 3 different locations going until we opened up the centre, which were more of a transient nature," said Gaudet. "But now that we have a centre that's located right in the centre of downtown Charlottetown, it's going to make it more accessible to anyone for whatever curiosity they have or questions they want answered, they will be able to drop in."

According to Gaudet, whether you're a budding Buddhist or just curious about what Buddhism is all about, this type of regular access to the monks is a real asset for Islanders.

"Being able to have those questions answered, instead of looking them up in a book, from somebody who has been practicing and is able to answer their questions with clarity."

The facility is currently open two nights a week, and on weekends, but the goal is to eventually have the facility open daily.

In addition to classes, the monks hope to offer cultural events like film screenings and live music.
TOP