A Wheel of Time - Buddhist art and artifacts

Waterloo, Canada -- The Canadian Clay and Glass Gallery opened its doors to Tenzin Thutop and Lobsang Gyaltsen, Tibetan monks from the Namgyal Monestary, so they could share one of the most intricate types of art - sand mandalas. It is part of their "The Wheel of Time" exhibit that features the religion and culture of Buddhism. 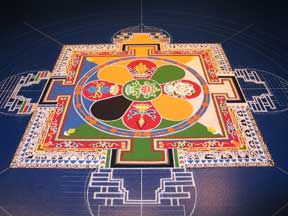 Arriving in Waterloo from their monastary in Ithaca, New York, Thutop and Gyaltsen have started this two-week process with a ceremony on October 13 which included chants and prayers followed by the designing of the mandala.

Before being situated in their New York-based branch, the pair travelled from Dharamesala, North India, the home of the Dalai Lama and also around 2000 Tibetans.

Creating sand mandalas has been a ritual for Buddhists since 500 BCE. Seeing as Tibet no longer exists, the monks needed a way to keep part of the Tibetan way of life alive. Not until 1988, when given permission by the Dalai Lama, were the Buddhists allowed to perform this type of offering in public. The mandalas are made with over a million grains of sand a piece that have been dyed 14 different colours. Each of the four main colours represents a different type of blessing.

The Chenresig mandala, which is the most common kind of mandala, encompasses the idea of compassion. Making them is supposed to help the monks come closer to achieving Buddha-like qualities - boundless compassion, unconditional love, contentment, unlimited wisdom, humblness and complete inner peace. This type of mandala is designed with a lotus in the centre, and eight petals surrounding it - each with their own meaning dealing with the teachings of Buddhism. Mandalas are made by rubbing a metal rod up and down a sand-filled funnel called a chakpu, which causes the sand to flow. Although the monks have a bit of leeway when it comes to the detail of the design, it is very important that this "blueprint" is not strayed from. The monks are also in a constant state of meditation when making the mandala.

The two-week period will end with the dismantling of the mandala on Thursday, October 27. On that day at 12:00 p.m., the monks will sweep up the sand and release it into the river as a sort of offering to Buddha. It is a way for the monks to become closer to reaching the level of compassion that Chenresig holds. By fully realizing the impermanence of everything around us, they should not feel as though all their time and energy that was put into the mandala was wasted.

The gallery ties together the concept of Chenresig with a display by Alex Yeung titled "The Compassionate One." He provides an interactive piece, which focuses on Kuan-yin, the Chinese name of Chenresig. This exhibit is of Kuan-yin's head encircled by storage cases that reach around 10 feet high. By the end of his exhibition, Yeung will have filled each cage with a clay hand. The general public is invited to write a wish or prayer of compassion to Kuan-yin on any one of the life-sized hands.

Alex Yeung's "The Compassionate One" will remain on exhibit until January 6. Tenzin Thutop and Lobsang Gyaltsen will continue working on the mandala until the dismantling ceremony at noon October 27. The gallery is a short walk from campus - just follow the train tracks southbound. It's just past the Waterloo Park petting zoo and the Perimeter Institute. For more information, visit to www.canadianclayandglass.ca.