Goodness within us all 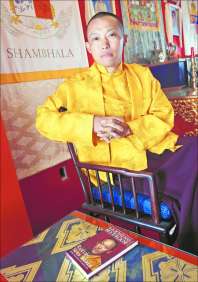 << Shambhala leader Sakyong Mipham Rinpoche sits on a shrine chair at the Shambala Centre in Halifax on Thursday. The Buddhist leader and meditation master has published his second book, Ruling Your World. (Picture: Peter Parsons)

Compared to the hustle and bustle of the outside city streets it’s almost startlingly quiet here at the world headquarters for Shambhala Buddhists, an ancient Tibetan religion.

Inside, Sakyong Mipham Rinpoche, world leader of Shambhala Buddhists, speaks about the basic goodness of all human beings, letting go of aggression and the peace that comes from compassion — all themes of his latest book Ruling Your World.

As idealistic as some of the concepts sound, the meditation master is quick to point out their everyday applications.

"This is just not some sort of whimsical idea or this sort of spiritual idealism but really it’s very practical. . . .," says the 42-year-old sometime Halifax resident and frequent world traveler.

"Compassion is a viable means as opposed to just aggression."

The Rinpoche believes angry words or deeds beget more angry words and deeds. And whether it’s a confrontation with a quarrelsome co-worker or rage on the roadways, karma makes sure the cycle of aggression continues.

He’s been studying these ideas since he was a child, schooled first by his late father Vidyadhara the Venerable Chogyam Trungpa Rinpoche, considered largely responsible for bringing Buddhism to the west after leading followers out of Communist occupied Tibet in 1959. He eventually picked Halifax as world headquarters because he considered it a peaceful place of tolerant people, says his son.

The Rinpoche (meaning precious jewel) still studies during retreats to India, between trips to the more than 200 other Shambhala centres across the globe.

He hopes his new book will help spread a core concept — that all people are basically good — to a wider audience.

It sounds like a difficult concept in a world with so much war and terror; poverty and pain.

But, he says, "when we say basic goodness really what we mean is that every individual has the ability in them to be awakened and enlightened. . . .

"(Are) there things that people do that are horrendous? . . . Certainly. . . . A lot of situations in the world are because people have not been cared for, they’ve not been loved, they’ve not been supported and then all they have is . . . these negative emotions. . . .

"Even, we say, the most vicious animals have compassion for their children. It’s there. It has to be cultivated and it may be really like far in another galaxy," he says with a laugh "but it’s there."

The Rinpoche says these days, people’s minds are often too muddled; "intoxicated with self-infatuation"; wrapped up in the culture of "me." But ironically, he says, when they start thinking more about others, they become happier.

He encourages his students to stop and think about their reactions instead of instinctively lashing out at real or perceived wrongs; to consider what may have led to the other person’s actions.

"Compassion here doesn’t mean you’re weak. . . . We mix compassion and wisdom . . . and compassion actually is a very, very strong state of mind so . . . some act of compassion may be telling somebody what they’ve done and try to help them and be direct. It’s not just saying everything is okay."

He suggests starting small — initially using just 10 per cent of the day trying to help others.

"You don’t have to start off by thinking you have to be nice to every single person, it’s like just try one person . . . have an approach as opposed to not having an approach at all and just kind of going through life haphazardly. Ten per cent, where you just take a little bit of the attitude and think okay I’ll think about myself the rest of the time."

Meditating can help bring such thoughts into focus, he says, noting the practice is still often considered "new age" in the west but is "hard and tested" in Tibetan culture.

"I know people who have meditated for years in very tough conditions who wouldn’t waste their time doing it unless it worked."

While he teaches meditation and Buddhism worldwide, the Rinpoche still considers himself a student, constantly learning as he conducts his busy schedule and deals with pressures unique to his position.

"A lot of the old (Tibetan) masters, like my father and his generation, they’re all passed away," he says, adding he feels a responsibility to carry on their work. "I was just in India and people like the Dalai Lama and other senior teachers you know they’re are asking me to do more."

His personal life is going to get busier this spring too.

"At least it’s the same woman right," he says with a laugh.

The Rinpoche will give a free public talk and book signing 7 p.m. March 10 at the Dalhousie Student Union Building (McInnes Room), where he will also hold a workshop 9 a.m.-5 p.m. March 11. Tickets are $75 ($50 for students).