Buddhist studies donor honoured at U of T Scarborough

Gift will enhance understanding of Buddhism

Toronto, Canada -- In a world of increasing international conflict and wars, an enhanced focus on the study of Buddhism is very timely. 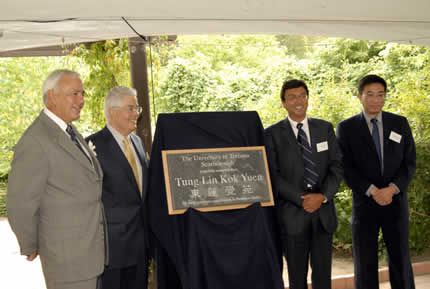 << Reception held at Miller Lash House
A celebration of the $4 million gift towards Buddhist Studies at the University of Toronto was held on August 23. From left are: U of T Chancellor David Peterson, Mr. Robert Ho, chairman of Tun Lin Kok Yuen (Hong Kong), U of T President David Naylor, and U of T Scarborough Principal Kwong-loi Shun. Photo by Ken Jones.

Those were the words of University of Toronto Chancellor David Peterson at a ceremony Aug. 23 to celebrate the generous $4-million contribution to Buddhist Studies made in April. The biggest gift to the University of Toronto at Scarborough in campus history, it was made by Tung Lin Kok Yuen Tung Lin Kok Yuen (Hong Kong), a non-profit Buddhist organization focused on raising and inspiring public interest in Buddhism.

“I can’t think of a more propitious time in the history of this world, when we are spending enormous time and resources to understand our differences and to enrich our understanding of one another, to focus on the study of Buddhism,” said the chancellor. “This tremendous donation from Tung Lin Kok Yuen will establish a lasting opportunity for leading international scholars to make exceptional contributions to teaching and research in Buddhist studies at the University of Toronto.”

Mr. Robert Ho, chair of the donor organization, and members of Tung Lin Kok Yuen’s board of directors from Hong Kong, were on hand for the recognition event held on the grounds and gardens of the historic Miller Lash House at the University of Toronto at Scarborough.

“Our goal is to enhance public knowledge of Buddhism, to raise awareness of and appreciation for Buddhism through support of Buddhist studies, not just in Canada but worldwide,” said Mr. Ho.

“We would like to see Buddhism viewed not just as a religion predominant in Asia, but more widely known and better understood by the international community,” added Mr. Ho. “Our board decided to make this gift to the University of Toronto because your university is located in a remarkably diverse city, and your Scarborough campus houses one of the most culturally diverse student populations among North American universities. Your institution is uniquely positioned to take on the responsibility of inspiring international interest in Buddhism.”

In celebration of the gift, a plaque was unveiled by Ho, Chancellor David Peterson, U of T president David Naylor and U of T at Scarborough principal Kwong-loi Shun. Members of the donor organization’s board of directors from Hong Kong also attended the ceremony and luncheon.

“Tung Lin Kok Yuen’s generosity is putting Canada on the map internationally, in terms of Buddhist studies,” says U of T president David Naylor. “They have made an extraordinary investment in Canada’s understanding of Buddhism and are committed to raising the profile of Buddhism in the western world.”

This gift has huge significance for the University, for the Scarborough campus, and for the community in the Toronto area, said professor Shun. “Not only will the gift enrich our curriculum and enhance the vibrant student experience at the University, it will also promote the interest in, and further the understanding of, Buddhism in the GTA community at large.”