Business and social leaders come together in Vancouver for Dalai Lama

VANCOUVER, Canada -- A group of politicians, athletes, CEOs and social activists put their differences aside and joined together in one room on Sunday to pose questions and gain insight from the Dalai Lama. 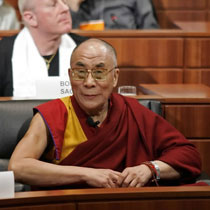 << The Dalai Lama takes his seat for his final dialogue session in Vancouver, B.C. with business and social leaders, Sunday, Sept. 10, 2006.
Photograph by : CP PHOTO/Richard Lam

The gathering was the last event in the Buddhist leader’s three-day visit of Vancouver, which was primarily to open an education centre in his name.

The meeting was intended to spark dialogue from leaders in the community, regardless of their background or social standing.

Each person in attendance was paired with someone else, usually from a drastically different place in society, and many of those involved called the experience productive.

Calgary-based Jim Gray, co-founder of the Canadian Hunter Exploration, one of Canada’s largest natural gas companies, was teamed up with Ken Lyotier, a former drug addict and CEO of United We Can, a non-profit that buys recycled cans and bottles from street people in Vancouver’s Downtown Eastside.

Lyotier left the conference’s first meeting after feeling out of place amongst the neatly dressed professionals. Gray decided to meet his partner on territory where he felt more comfortable, so he ventured to the bottle depot in Vancouver’s poorest neighbourhood. They ended up talking for more than two hours.

He added that while he assumed Lyotier expects him to “disappear back to Calgary,” he intends to visit the area in October with his daughter to learn more about addiction.

Weyerhaeuser recently took on responsibility for the topic of mobility with the World Business Council for Substantiality Development.

Harcourt has spent several years looking at the issue of mobility from an activist’s perspective.

“I suddenly had access to someone who’d been doing leading-edge thinking from the point of view of the social sector and the human side,” Weyerhaeuser said.

Selected attendees had the opportunity to ask the Dalai Lama questions regarding global and social issues.

One question was regarding how people could take responsibility in a society that focuses on the individual.

“Taking care of one’s self or looking after one’s self is justified,” the Dalai Lama said. “But if you look more deeper than one individual, no matter how able or strong the person, without society he or she cannot manage.”

During his visit to Vancouver, the Dalai Lama attended several public forums on a variety of topics.

On Friday, he met with a theatre full of young people to discuss how to cultivate compassion in the world.

The following day, the 71-year-old met with scientists to talk about how stress affects humans. Later that day, he received his honorary Canadian citizenship.