KITCHENER, Ontario (Canada) -- Hands flail and voices rise at the Phommaviharam Buddhist Temple. About a dozen monks and lay people sitting around a table hash out details of an event they're staging at Kitchener City Hall next month. 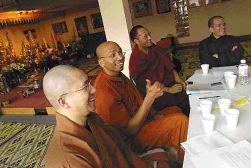 << Organizers from local Buddhist temples and meditation centres meet at the Phommaviharam Buddhist Temple in Kitchener to plan an upcoming Buddha Day, the first event they are presenting as a group. From the left are: Ven. Xu Zhao of the Buddhist Prajna Temple, Ven. Deba Mitra Bhikkhu of the Phommaviharam Buddhist Temple, Lama Karma Phuntsok of the Palpung Yeshe Chokhor Meditation Centre and Thich Dao Hanh of the Vien Quang Vietnamese Buddhist Association.

At first glance, it looks like just another lively planning meeting.

But it's a sign that the practice of an old religion is entering a new phase.

With at least half-a-dozen Buddhist temples and meditation centres in Waterloo Region, each working in different languages and teaching different schools of Buddhism, different groups are working together for the first time.

"It's all very new," said Linda Hayes, a board member of the Palpung Yeshe Chokhor Meditation Centre in Kitchener.

"Although the number continues to grow, it's still fairly small a percentage of the general population," Hayes said.

So members of her meditation centre decided to join the project to support, and receive encouragement, from other small Buddhist groups.

"(It's important) knowing you're not alone," Hayes said. "You're not like a voice in the wilderness."

The newly-formed Buddhist group -- dubbed the Inter-Buddhist Fellowship of Waterloo Region -- has two main goals, said Ven. Deba Mitra Bhikkhu, one of the monks at Phommaviharam Buddhist Temple, and chief motivator of the fellowship.

The goals are to raise public awareness of local Buddhist communities and to get the different local Buddhist groups to get to know each other and create a spiritual friendship, he said.

"What is the common thing that can connect each other?"

In their case, it's the instructions of the Buddha, a great teacher who lived in India nearly 2,500 years ago. All of the fellowship's members mark the Buddha's birthday in May.

New Canadians often cling tightly to their cultural identity and that can be a barrier to meeting people in other groups, Bhikkhu said.

Members of some local Buddhist congregations speak Chinese. Others speak Vietnamese, Tibetan, Laotian or other languages. They also follow different schools of Buddhism that have developed rituals that differ from one denomination to the other.

The new fellowship isn't ignoring cultural identity, Bhikkhu said, but is trying to focus on common Buddhist beliefs and move beyond what he calls "particularism."

The four monks, including Bhikkhu, look a lot alike. Their heads are shaven or sport short stubble. They wear robes of brown, ochre, orange and maroon.

They practise different branches of Buddhism. But so far, differences in theology don't seem to be an obstacle.

The language barrier is the biggest challenge, said Bhikkhu.

Monks from two of the temples are accompanied by a lay member who translates for them.

At times during the meeting, several conversations are taking place at once. Buddhist Prajna Temple members converse together in Mandarin (Chinese) while the Vien Quang Vietnamese Buddhist Association temple members talk things over in their mother tongue.

Others continue talking in English.

But language isn't the only obstacle to the negotiations. Different schools of Buddhism have slightly different rituals to mark the same occasion.

Fellowship members want to begin next month's Buddha Day Celebration with a ritual they do together. So people around the table describe how their own ritual works, then eventually agree on a way to blend different traditions and create a unique ritual.

Also, at the beginning of Buddha Day, about a dozen monks and lay people plan to chant in English.

Lama Karma Phuntsok, of the Palpung Yeshe Chokhor Meditation Centre, suggests that those who will be chanting should rehearse to get their tone and pronunciation just right.

"We need practice time because it's really not our language," he said, to quick agreement around the table.

In addition to the joint rituals, each temple will present its own 20- to 25-minute program. Some will include more chanting. Others will highlight singing children. One temple hopes to present a monk from the famous Shaolin Monastery in China, to perform a kung fu demonstration.

Throughout the talks, Bhikkhu tries to head off potential conflicts.

For example, rather than providing different treats from various ethnic cultures of different congregations, the group decides to offer only one type of cookie for all. That way nobody can become proud and look down on cookies from a different culture.

Some were also worried about putting any representation of the Buddha on the poster. If the poster falls on the ground and someone steps on it, he or she might accumulate bad karma, Bhikkhu said.

In the end, the group opted to use a picture of the Buddha from South Asia, but decided on a silhouette, in order to downplay the cultural specificity of the Buddha's image.

When devising their rituals for Buddha Day celebrations, the fellowship also had to consider the restrictions on using the City Hall rotunda.

Using real flowers and fire -- these are staples in Buddhist rituals -- is not allowed. So the fellowship will use plastic flowers and conduct the rituals without burning incense.

For part of the program they will use a ritual from the Mahayana tradition, prominent in Tibet and China.

"We accept other people's opinion and (it's) important to respect others' opinions," Ven. Xu Zhao of the Buddhist Prajna Temple in Kitchener said through translator Sarah Chen.

"That does not mean the only (valid) one is the Mahayana one."

M embers of the fellowship hope that the Buddha Day Celebration comes off without a hitch.

But their co-operation could also have benefits for the long term.

Members of the fledgling fellowship have discussed providing links to each group's websites on their own websites.

And after working closely on this Buddha Day project, they can share practical ideas and various contact information for people in the region.

And when one temple organizes an event, others might spread the word to members on their mailing lists.

In addition to serving as a monk at the temple, Bhikkhu is studying toward a PhD in religious studies at Wilfrid Laurier University in Waterloo.

His focus is contemporary Buddhism in North America.

Recent academic research indicates that Buddhists in North America are picking and choosing their practices from across denominational lines.

There are two main factors at work, Bhikku said -- individualism and the Internet.

The ethic of individualism, which is widespread in North America, encourages people to take whatever they need and use it for themselves, he said.

And the Internet gives young people easy access to Buddhist rituals from many traditions.

Bhikkhu said the evolution of Buddhism, at least in North America, could mean the lines between schools of Buddhism will blur as people pick-and-choose practices from different traditions.