Sacred Buddhist relics display is a shrine to the heart

Duncan, Canada -- Experience the energy of loving kindness this week as sacred relics of the Buddha visit Duncan during the Heart Shrine Relic Tour. 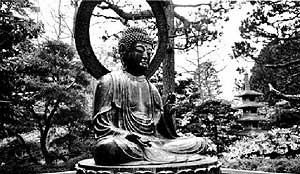 << A huge bronze statue of Buddha is planned (pictured left); meanwhile, Fred Roland meditates next to the sacred relics which are visiting the Cowichan Theatre this week. Courtesy Fred Roland

The relics, which are pearl-like crystals, were found among the ashes of Buddhist masters and holy beings and are both an embodiment and a symbol of Maitreya, the Buddhist belief of loving kindness.

“They have been carried since the beginning of Buddhism, been passed through lineages, from high teacher to high teacher and last held by the Dalai Lama,” said relic custodian, Fred Roland.

Lama Zopa Rinpoche, a student of His Holiness the Dalai Lama, gathered the sacred relics for the tour.

The philosophy of Maitreya counterbalances the devastating suffering in the world and gives people a positive symbol for meditation and prayer, said Roland.

The relics will be displayed in a small gold vases, or stupas, and encircle a life-size statue of the Maitreya Buddha.

Project organizers say visitors often report experiences of inspiration and healing when in the presence of the relics, while some are inspired to pray for world peace and to develop their inner wisdom.

Eventually they will be enshrined in a larger 150-metre bronze statue of the Maitreya Buddha being built in Kushinagar, India.

The bronze Buddha is part of a larger Maitreya project in Kushinagar, a spiritual, educational and health centre in one of the poorest areas in northern India.

Construction will start in 2008 on this project that involves Buddhists from all over the world.

Roland, who grew up in the Cowichan Valley, became involved with Buddhism in 2001 when he traveled to India to attend a 15-day seminar with the His Holiness the Dali Lama.

Roland found similarities between his own First Nation and Buddhist teachings in how both view life holistically.

Then a door opened to his relationship with the Maitreya project.

For Roland the project provides personal growth and gives him the opportunity to learn another aspect of meditation.

“Historically we think about Buddhist teachings as a way of being,” he said.

“I look at the compassion and love that comes through this Buddhist teaching and how much more we can learn by allowing ourselves to understand a little of this idealism.”

Roland points to the challenges that have been put in front of Buddhists and yet they still continue to promote love and compassion.

“It really helps, even myself, to look at a better outcome of some of the struggles we have in our society and how can we deal with that in a more gentler manner instead of some of the horrific ways human beings have been treated over the years.”

“We have so much negativity and devastation all around us, how can we look at something like that in a positive manner?” he said.