The marvels of Buddhism in Niagara Falls

Niagara Falls, Canada -- One Sunday morning recently, we had the opportunity to visit two interesting sites that many Niagarans aren't aware of. The first was the Ten Thousand Buddhas Sarira Stupa on River Road, just by the Whirlpool Bridge in Niagara Falls. This spectacular building was begun in 1995 and completed in July 2002. 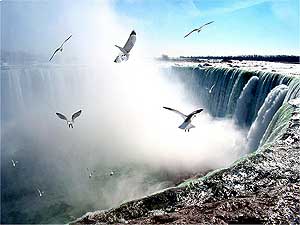 The main feature of the first floor is a beautiful seven-ton statue of the original teacher of Buddhism, made of green bronze and beautifully detailed.

I didn't count the other 9,999 Buddhas in the building, but I am ready to believe that the number is exact! There are Buddhas everywhere on all 7 of the floors. Many are quite small, but there are also many large figures, too.

On the seventh floor is the huge Grand Bell of World Peace. It has only been rung once. On that occasion, the vibration shattered all the windows on that level!

Tours of the Stupa are given every Saturday and Sunday by volunteers who come all the way from Toronto which has the nearest large Buddhist community.

The adjacent temple has services at 4.30 a.m. and 4 p.m. It is open to the public every day from 10 a.m. to 5 p.m. The only two permanent residents of the temple are a monk and a nun. When we left, the monk bowed to us and said "Take it easy!"

The next stop on our mini-tour was at another much smaller, much more modest Buddhist temple at 4694 Morrison Avenue in Niagara Falls. Our destination was the Jade Museum at the back of the temple. We had come to see the 16-ton piece of jade which came from the extensive mines in northern British Columbia. It was worth the trip.

The jade is huge. While it has obviously been polished, it has been left in its original shape so that it is called an "organic sculpture" which seems to rise out of the floor. This amazing piece of jade was discovered after a Buddhist monk, Luang Pok Kiyung saw it during meditation, and determined to have it moved to Niagara Falls. Called "A Rock From Heaven", it reached its new home in 1996.