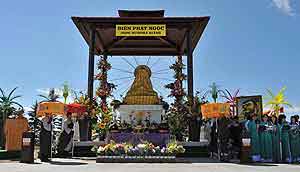 << The Jade Buddha, the world's largest Buddha carved from gemstone quality jade, is cloaked under a veil at the Westlock Meditation Center, approximately 65 km. northwest of Edmonton July 25, 2010. The Jade Buddha is on a world tour with Edmonton's exhibition scheduled from July 25 to August 1. When the world tour is completed it's home will be in Bendigo, Australia. The nine foot tall Buddha weighs over four tonnes. Thousands of people from the Edmonton area flocked to the Westlock Meditation Center to view the unveiling of largest jade Buddha in the world.
Photograph by: Larry Wong, edmontonjournal.com

Peace and tranquillity are what we long for, but those qualities are elusive and rare in our lives. So when the opportunity presents itself to get closer to that state, many take it, which is why more than 4,000 people from across Western Canada and the United States gathered Sunday in the country, 45 kilometres north of Edmonton.

They had come to see the Jade Buddha of Universal Peace, which is supposed to bring inner peace and happiness to those who see it. How could it not, under perfectly blue prairie skies, with cheery yellow canola fields nearby and the air heavy with the sweet smell of freshly cut field grass warmed by the sun?

Excited children leaned forward in anticipation and adults held digital and video cameras at the ready as a gold cloth adorned with red Buddhist symbols was slowly pulled away, revealing a four-metre high statue of a young, slim, smiling Buddha sitting cross-legged on a mammoth alabaster throne.

Thuy Nguyen said her family has a picture of the Jade Buddha at home and her children Benjamin, 5, and Jennifer, 8, have been excited to actually see it since they were told of its impending visit.

"I thought it was going to be bigger, but I guess it's the right size," said Salena Wong, who came to see the Jade Buddha with her family.

But Phi Phan, accompanied by his fiancee Mystique Wendell, was suitably impressed.

"I actually didn't know about the Jade Buddha until I read about it coming here, so it was something I wanted to see, just to say that I've seen it," he said. "The idea of it promoting universal peace, and to have this opportunity to come together as one community, in a place like this, is really something special. I think this is a once-in-a-lifetime opportunity."

The four-tonne statue, valued at approximately $5 million, is the largest such figure in the world, carved from a 100-million-year-old gemstone boulder mined in northern B.C., near the Yukon border. It was commissioned by an Australian couple and was finished in December 2008. It took sculptors and artists in Thailand five years to complete. It has been touring the world to promote universal peace. At the end of the tour, the statue will be on permanent display in Victoria, Australia, where the couple who commissioned it live.

There are three stops on the Canadian leg of the tour. It started last month in a Vietnamese Buddhist Centre in Mississauga, outside of Toronto, and ends in August at a new temple in the Vancouver suburb of Aldergrove. The statue is available for free public viewing from 9 a.m. to 9 p.m. each day this week at the new Westlock Meditation Centre. There will be a multi-faith candlelight vigil from 9 p.m. to 11 p.m. Saturday, with a closing ceremony at 11 a.m. Sunday.

"Our hope is that when people see the Buddha they take a moment to reflect on peace," said Calvin Nguyen, an organizer of Sunday's event. "We want, if you will, to capitalize on the theme of universal peace and internalize it, because inner peace leads to outer peace. When we have inner peace, everything we do externally reflects that."

Ruth-Ellen Dowhan, who lives minutes from the centre, sat slightly apart from the crowds, watching the proceedings with a friend.

"We're in a peaceful place here," she said, smiling, "but then, I'm a Zen person normally.

"This is a world event and we're not going to miss it when it's so close to our backyard," Dowhan added. Besides, "Who can't believe in world peace? Who can't embrace that? We should all embrace that," she said.