King and queen of Himalayan kingdom live in the city 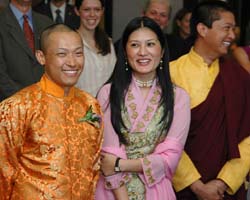 The new princess, who was born at the IWK Health Centre, has been named Drukmo Yeshe Sarasvati Ziji Mukpo, which means Lady Dragon Wisdom.

She is the first child of Sakyong Mipham Rinpoche and his queen, Sakyong Wangmo Khandro Tseyang, who are holders of the hereditary Shambhala Buddhist lineage and were married in Halifax in 2006.

Traditional Tibetan rituals are being performed privately at the family's home in Halifax.

The royal line dates back over a thousand years to the Tibetan king, Gesar of Ling, whose epic story is told in song and dance throughout Asia.

"The birth was cheerful, uplifted and free of complications," Dr. Mitchell Levy, personal physician to the royal family, said in a news release. "Both mother and child are healthy and resting well."

Levy is professor of medicine at the Alpert Medical School of Brown University in Providence, R.I.

The Shambhala Buddhist tradition has thousands of members in about 50 countries throughout the world. It takes its name from the Himalayan kingdom of Shambhala, whose residents are known for their wisdom and compassion.