Monks from a monastery in India conduct a closing ceremony Thursday for a sand mandala they created at the Cascade Park Community Library. 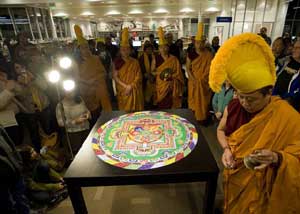 << After performing ritual chants for a crowd at the Cascade Park Community Library, Tibetan Buddhist monks prepare to brush away their intricate sand mandala, meant as a blessing and symbolizing the impermanence of life.
Photo By Steven Lane, The Columbian

Standing in front of a shrine with a large photo of the Dalai Lama, and facing a colorful and mysterious sand mandala they’d spent three days making, the maroon- and orange-clad men began by singing guttural low tones progressing to medium tones, their chants occasionally punctuated with a brass bell and two small cymbals.

As they chanted, a crowd of perhaps two hundred at the Cascade Park Community Library watched and listened, respectfully and almost entranced. At least one woman sat on the floor, her eyes closed and hands held together in prayer. Others closed their eyes, the better to hear the songs.

The ceremony was measured and deliberate, a sharp contrast from our hurry-up-and-get-it-done, then-do-something-else world.

When the monks’ music ended, one of them walked around the table that held the mandala and drew lines toward its center, like spokes of a wheel, in the sand.

It was time for the ritual dismantling of the intricate and sacred artwork, speaking to the impermanence of life and based on symbolic designs that are thousands of years old.

The mandala was a marvel of fine-lined intricacy, its basic format a walled, gated garden around a structure. (How could the monks possibly drop colored sand in such perfect detail?)

Another monk used a paint brush to blend the colored sand into curving designs, then simply swept it all into a pile in the center. Under the monks’ teachings, the design was gone but the sand still has power for good.

Using a plastic spoon, a monk put small amounts of the sand in tiny plastic zip bags and gave them free, as blessings, to the crowd. The rest of the sand will be placed in the Columbia River as a blessing to creatures that live in the water, to the environment and more.

These monks now live in exile in the Drepung Loseling Phukhang Monastery of southern India. In 1950, when Chinese Communist soldiers occupied and attacked Tibet, the monks fled over the Himalayas to their current home.

Besides their other studies, the five monks have studied making sand mandalas, and the chants, from seven to 10 years, Wilson said.

“These five monks have essentially PhDs in sand-mandala construction,” Wilson said, adding that she calls it “sand mandalogy.”

This week’s presentation by the monks is believed to be the first in Vancouver, Wilson said.

Before 1989, when such monks first created sand mandalas for the public in Washington, D.C., the ancient practice was secretive, offered to the initiated only, she said.

Besides spreading blessings to the world, the tour is designed to raise donations to support the monastery. The monks live so simply that it costs only $240 a year to feed, clothe, house and educate one of them.

Those interested can visit their website at http://loselingphukhang.org/. Or the Shakyamuni Tibetan Buddhist Center of Portand at http:// stbcportland.org.