Mexico City, Mexico -- The Dalai Lama told Mexicans on Saturday that Christianity and Buddhism coincide in their pursuit of human happiness. 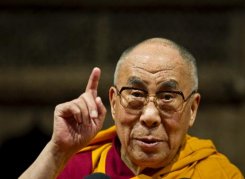 << The Dalai Lama, delivers a speech during the Programme of Buddhist Teachings in Mexico City, on October 12, 2011

Both religions promote "love, compassion and self-discipline" that lead to happiness, the exiled Tibetan spiritual leader told some 3,000 people.

More than 90 percent of Mexico's 118 million people are Catholic.

With his usual smile and good humor, the Dalai Lama said that for decades, Christian leaders have been interested in some Buddhist teachings.

Christianity promotes the concept of a transcendent and unique God as creator, while Buddhism refutes the existence of a creator.

The Dalai Lama's trip, which began Friday, marks his fourth to Mexico, home to some 5,000 Buddhists. He will leave on Wednesday.

US actor and Tibet activist Richard Gere participated in the event, which was preceded by a Tibetan music show and held at an entertainment center in northern Mexico City.

No matter how many people are in the Dalai Lama's presence, Gere said, "something special happens."

"I'm not a movie star, I'm just a student like you," said Gere, 64, in speaking about his advocacy efforts.

The enthusiasm of attendees was dampened by audio problems that made the conference unintelligible for long periods of time.

"We came with much devotion to listen to His Holiness. We waited a long time and paid a lot for tickets. It's not fair, the sound is a disaster," attendee Hilda Montano told AFP.

The Dalai Lama fled Tibet following a failed uprising against Chinese occupation in 1959 and later founded the Tibetan government-in-exile in India. He stepped down as its leader in 2011.