Sao Paulo, Brazil -- In the morning of 29 April, His Holiness the Dalai Lama gave an exclusive half-an-hour interview to Mr. Otavio Fris Filho and Ms. Claudia Colluci, senior reporters of the Brazilian newspaper, Folhe de Sao Paulo, which is one of the biggest national dailies of Brazil. 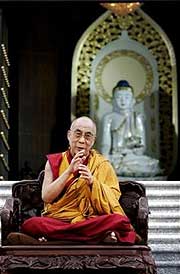 His Holiness gave a public talk on the Power of Compassion at Sao Paulo's gymnasium indoor stadium, Ginasio Estadual Ibirapuera. Federal Deputy Walter Feldman introduced His Holiness to the audience by paying rich tribute. At the end of the talk, which was attended by more than 7,000 people, His Holiness attended to a series of questions from the audience.

In his address at the function, which was attended by over 500 people, His Holiness reminded the crowd that merely having a beautiful statue of Mahatma Gandhi is not enough. It is more important to practice the principles of non-violence, truth and justice, which Mahatma Gandhi taught and stood for. He also commented that India's age old culture of religious tolerance was the most relevant now all over the world to reduce tension and make the society more peaceful.

During the lunch break, His Holiness gave an interview to the Globo television, the biggest television channel in Brazil.

In the afternoon, His Holiness attended an Inter-religious Prayer for Peace at the Cathedral da Se organised by the Archbishop of Sao Paulo, Dom Claudio Hummes.

In their presentation, all the religious leaders paid rich tribute to His Holiness the Dalai Lama for his moral leadership as well as for his ceaseless efforts in bringing harmony among various religious traditions.

Apart from the religious and civic leaders, over one thousand people attended the event at the Cathedral da Se and a few hundreds of people stood outside the Cathedral to greet His Holiness the Dalai Lama.

The event was opened and closed with songs of well-known singer Fortuna and the chord of the Benedictine monks.

Yesterday, His Holiness left for Buenos Aires, where he will stay for three days.