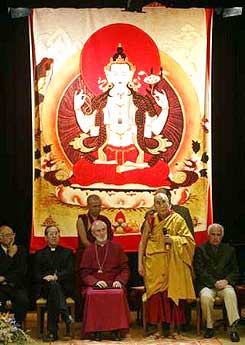 <<  Tibetan spiritual leader the Dalai Lama (2nd R) attends a gathering with members of different religions in Lima, Peru May 9, 2006. The Dalai Lama ends a three-day visit to Peru on Tuesday. REUTERS/Pilar Olivares

His Holiness arrived in Peru from Chile on Sunday, May 7. In his close interaction with the intellectuals and opinion makers of Peru, His Holiness addressed various questions from the audience regarding the management of emotions.

He also drew the attention of intellectuals and opinion makers, including the business community, to the plight of the underprivileged people, particularly the indigenous population of Incas.

The huge economic gap is not only morally wrong, but also a source of problem and instability in the society, he said. He called on the privileged community to share some of their resources to improve education and health facilities of the underprivileged people.

Earlier, His Holiness participated in the Inter-religious Meet with the representative of ten different religious traditions.

While speaking on the occasion, His Holiness said that the religious-based conflicts are the most unfortunate and should be avoided by learning to respect each other's traditions and by establishing harmony among various religious traditions.

These included organizing academic discussions to find out the commonalities and differences between various religious traditions; arranging dialogues among various spiritual leaders; organizing joint pilgrimage to various religious sites; and organizing a bigger gathering such as the one organized by the late Pope John Paul II in Assisi, Italy, a few years ago.

Earlier, in the morning, His Holiness gave a teaching on the "Eight Verses of the Training of Mind" to the Buddhist community.

On the second day (May 8), His Holiness the Dalai Lama paid a visit to Cusco, the ancient mythical capital of Inca civilization, where he had a very emotional gathering with the elders of the indigenous people of Incas.

The gathering was held at the Temple Qoricancha (Sacred Temple of Sun) in the heart of Cusco City, located at the altitude of 3,000 meters above the sea level.

In his address to the special gathering of the representatives of the Altomisayoqs Q'eros, considered as a direct descendent of Quechuas, one of the tribes of Inca civilization, His Holiness advised the indigenous population to protect their native culture and civilization with modern education. He advised the natives not to isolate themselves from the modern society.

The representatives the native people offered His Holiness with a pair of hand-woven small Inca bag and bracelet with seeds, while His Holiness offered elders of the indigenous people with Khatag, a traditional Tibetan silk scarf, as a symbol of friendship and mutual respect.

Later in the afternoon, the Major of Cusco Mr. Carlos Valencia gave a formal reception to His Holiness in the City Hall in the presence of all his senior staff members.

The Mayor presented His Holiness with a medal and resolution to declare him as a distinguished guest of Cusco City.

Immediately after the Mayor's reception, His Holiness gave a public talk on "Ancient Culture in the Modern Society" in the City Hall auditorium which was attended by 1,500 people (800 people in the main auditorium and another 700 people in the annexure of the Town Hall with a short circuit TV facility).

In his talk, His Holiness advised the audience to learn from the culture of native indigenous people how to care the mother earth, the only home for the humanity.

His Holiness drew the attention of the audience to the issue of the global environmental crisis, by highlighting the seriousness the problem of global warming, shortage of drinking water in Indian sub-continent and China, and desertification in many parts of the world.

He also advised the audience to assist the native indigenous people to protect their age-old culture and civilization by improving the education facilities for them.

On Sunday, May 07, immediately upon the arrival in Lima, the capital of Peru yesterday, His Holiness attended the Press Meet at the Miraflores Park Hotel, where he has been accommodated in Peru. Around one hundred local and international media personnel attended the press meet.

Later in the evening on that day, His Holiness gave a public talk on "The Power of Tolerance" at the auditorium of Catholic University of Peru and it was attended by 3,000 people.

His Holiness the Dalai Lama is visiting Peru for the first time.