Sydney, Australia -- SCIENTIFIC studies purporting to show the ancient Buddhist practice of meditation leads to permanent beneficial changes in the brain rest on shaky foundations, a world authority on Buddhism has warned. 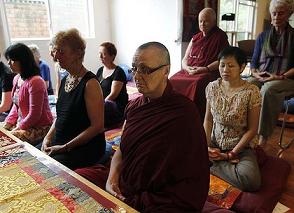 Bernard Faure, a visiting professor of Buddhist studies at the University of Sydney, said in a recent Sydney Ideas talk that little was known about the impact of meditation on the brain, and the interpretation of research results had ''a lot of wishful thinking".

Neuroscientific studies since 2004 have claimed the minds of Buddhist meditators are more stable, capable of greater compassion and have higher levels of activity in the part of the brain associated with wellbeing.

''The mutual validation of Tibetan Buddhism and neuroscience has generated a lot of funding on both sides," Professor Faure said.

But Professor Faure, who is also the Kao chair in Japanese religion at Columbia University, in the US, said the desire for quick results had "pre-empted robust critical questions".

For one thing, the use of rectal thermometers and electrodes on the body was likely to interrupt the meditator's concentration during experiments, he said.

Moreover, the study sizes were unreliably small, and despite the likely relevance to the results of the culturally specific origins and meanings of the mental states under study, neuroscientists had demonstrated little attempt to understand them.

The president of the Buddhist Council of NSW, Brian White, said interest in meditation was "generally increasing because of the scientific aspects becoming better known".

Venerable Thubten Chokyi, a Tibetan Buddhist nun and spiritual program co-ordinator at the Vajrayana Institute in Ashfield, said the mental pliancy and reduction of stress and anxiety that were byproducts of meditation were beneficial whether it was practised in a spiritual context or not. "Both have their place," she said.

The director of the Sydney Meditation Centre, Kevin Hume, who leads meditation classes for "highly educated professional people" said that while his clients were aware of scientific research on the benefits of meditation, the global financial crisis had been "far more significant in terms of the spike in numbers".