Ladakh Festival to include Dhamma and meditation teachings

Leh, Ladakh (India) -- The region of Ladakh lies tucked away in north India amidst the remote valleys of the western Himalayas. 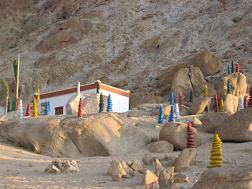 Cut off from the rest of the world for the better part of the year, it springs to life in a vibrant burst of colour through the summer when international tourists flock to this region 11,000 feet above sea level to take in its cultural delights, explore ancient monasteries,white-water rafting or trek into the green valleys hidden in the folds of the Karakoram range.

Every year the Ladakh festival  takes place from September 1st to the 15th in Leh and nearby villages and stretches till late September, ending just before the winter cold begins again. The Festival highlights the sports and culture of the region, starting off with a long and colourful procession through Leh. What follows is a week of cultural performances,craft stalls, local food and sports such as archery contests, polo matches, white-water rafting expeditions and treks.

Included in this year's programs are spiritual teachings in the form of yoga camps, meditation retreats and Dhamma talks by Ven Sanghasena, one of the most respected and well known monks in this region. Ven Sanghasena started the Mahabodhi International Meditation Centre on 200 acres of land in Choglamsar, a village about 8 km from Leh.

It has since grown into a campus of several buildings including residential schools , homes for the aged and the blind and monasteries for monks and nuns.  It also features a well equipped retreat centre set into a rock face and offering spectacular vistas of the Indus valley. The popular 3 day and 10 day retreats, held at this Centre has been an open secret among Buddhist pilgrims,trekkers, and other visitors for several years.

It is expected that this program will be a popular feature of the Festival allowing visitors to drink deeply from the spiritual heritage of Ladakh.