What can neuroscience learn from Buddhist meditation?

Sydney, Australia -- Mindfulness has recently surged in popularity, but its modern application has ancient Buddhist roots. Lynne Malcolm and Olivia Willis find out what long-term meditators and neuroscientists can learn from each other. 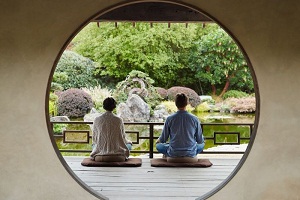 There's no shortage of press touting the benefits of mindfulness and meditation. It's increasingly popular in clinical therapy and for managing everyday stress. But what does science say about the centuries-old spiritual practice? And equally, what can the ancient Buddhist tradition teach neuroscientists about the brain?

In an effort to find out, a group of meditation practitioners, psychologists and neuroscientists gathered together for a weekend Zen retreat in rural New South Wales.

'The idea was to bring long-term meditators together and people who are researching certain parts of cognition ... and learn from each other's perspectives. So, the scientific perspective but also the meditative perspective,' Dr Britta Biedermann says.

Biedermann, a cognitive scientist and long-time meditator, initiated the project as part of her research at the ARC Centre of Excellence in Cognition and its Disorders at Macquarie University. She says the neuroscientists and psychologists were encouraged to use the introspection of long-term meditators to inform their understanding of the cognitive process.

Professor Peter Sedlmeier, a neuroscientist from the University of Chemnitz in Germany, was also invited to the weekend. Nearly 10 years ago, Sedlmeier undertook a large meta-analysis of all the scientific research that's been done on meditation.

'One of the challenges of meditation research is that there are so many different styles,' he says.

'There are techniques where you simply observe your breath, your body and your mind, which are used in the Buddhist tradition. In yoga, there's pranayama, where you influence your breath and your body.

'In chakra meditation, you focus on energy centres of your body. Mantra meditation involves repeating a selected word or mantra in your mind and using it to minimise your concentration.'

Techniques for enlightenment repurposed for therapy

Sedlmeier says that while all types of meditation are effective, the research isn't sufficient enough to make clear distinctions between different effects of each one. But when it comes to overall effectiveness, he says the benefits of meditation are felt more by 'healthy people' than by clinical patients undergoing therapy.

Research shows that human emotion is the area of cognition that experiences the most pronounced effects of meditation, so it comes as no surprise that the ancient Buddhist technique is common practice amongst many psychotherapists. But Sedlmeier warns it should never replace the need for therapy altogether.

'Meditation was originally not meant as a therapy but as a way to enlarge your consciousness. The Indian schools deal with liberation or enlightenment or a spiritual development, and not about therapy,' he says.

'I think one should just try out what helps and what does not help ... I think it is all open to empirical scrutiny.'

Psychologist Emily White, who also attended the weekend, says meditation and mindfulness are at the core of her clinical practice. She works in a type of therapy called dialectical behaviour therapy, with patients who have difficulty regulating their emotions.

'The core skill underlying that is mindfulness, teaching people to bring themselves back to the present moment in many different ways,' she says.

White says the therapy was originally developed for people with chronic suicidality and self-harm tendencies, but that evidence shows it's also an effective treatment for people with drug and alcohol addiction and people with some eating disorders.

'There's a lot of research that shows it is effective in the populations it is intended to treat. And on a personal experience, I definitely see improvements,' she says.

'When clients start using the skills that we teach them you can see their lives begin to slowly stabilise and head in a direction that they are hoping to head in.'

A growing number of scientific studies of meditation are relying on brain scanning technologies such as FMRI to determine whether there are cognitive effects that occur as a result of the practice, and if so, what these effects are are.

'[There's] lots of subjective room to do your interpretation or to come up with another interpretation. But there is some convergence that some parts of the brain, like the so-called insula, seem to be very much involved when we look at the results of meditation.

Many of the participants from the weekend retreat are followers of the Zen Buddhism tradition. Zen teacher Subhana Barzaghi says the way meditation is now being adopted is not necessarily reflective of its original purpose.

'What are we meditating for? It's not just for our own health and wellbeing and relaxation and salvation, it is intimately connected with liberation for all beings. It's really important that it's not just seen as an individualist kind of pursuit in that way,' she says.

'I think meditation needs to be put in that context of a wider ethical base and framework, and even Zen has had to struggle with this. When it is taken out of that ethical base or framework ... I mean, you can be mindful of shooting a gun, but that's not the kind of mindfulness that the Buddha taught and not the mindfulness that we are proposing in the Zen tradition either.'

What then is the difference between the secular discipline of modern mindfulness and the ancient religious practice of meditation?

'The term "mindfulness" is not clearly defined nowadays. What is different from the original definition of mindfulness ... is this aspect of acceptance is not there,' says Sedlmeier.

'Be it Buddhist or Hindu, you always have some ethical concerns, rules of life. It's basically a way of living that is embedded also in some spiritual context.

'The ethical part might matter a lot, and this has been discussed in the literature, especially by Buddhist scholars. They raise the question whether it's legitimate to use that mindfulness concept without being aware of the ethical aspects.'

Ancient, modern, religious or secular, the neuroscientist says there is convincing evidence to show that meditation—broadly speaking—is an effective practice.

'We do not yet have a good theory of meditation. But to arrive at such a theory it would be good to talk to each other,' he says.

'If experienced meditators talk to each other in a systematic way ... and come up with some commonalities, chances are that we will find some specific parts of a good theory of meditation.'