A Healthy Fast Is as Good as a Fresh Start

Seoul, South Korea -- When your computer stalls for whatever reason, you press the “reset” button to make it start again, and most of the time it is back up and running at a good pace. Fasting, no longer a habit of monks alone but practiced by more and more health-conscious people in such programs as colonic irrigation, has been described as pressing your body’s “reset” button. 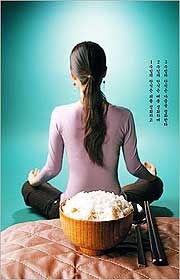 It simply means halting food intake for a certain period of time, often for a specific goal. But that is an extremely demanding task and requires a great deal of determination, appetite being one of the most fundamental human drives.

That is why fasting frightens us when used as a last resort to express determination, in the form of hunger strikes. Mahatma Gandhi’s use of fasting to force India’s independence from imperial British rule is the classic example. In Korea, too, opposition leaders protested against authoritarian governments in the 1960s through 1980s with hunger strikes, and more recently, the Buddhist nun Jiyul did it to halt construction of a tunnel through Mt. Cheonseong.

In religious circles, fasting is an ascetic practice. Buddha reached enlightenment after having only one meal a week for over six years, while Jesus began his public life after 40 days of fasting in the wilderness. Muslims fast from dawn to dusk for the entire ninth month of the Islamic calendar, Ramadan, when not even a drop of water crosses their lips. That way they show both reverence to God and understand the hunger of the poor.

Yet that expression of protest or devotion is finding its way into more mundane areas. Some people do it to lose weight, others to restore the body’s innate self-healing ability that we have forgotten. “Hunger is perhaps the most intense discomfort people can feel. Our bodies recognize fasting as an emergency state. Autonomic nerves that were hibernating become alive, and react very sensitively and violently. They begin to throw away all the unnecessary things, leaving only the minimum needed for survival. In this process, all the waste and toxins are being eliminated,” say Prof. Shin Hyun-dae at Kyung Hee Medical Center.

So in some ways fasting can be seen as a healing treatment that purifies our bodies. You will feel much lighter when you start fasting. Eating habits thrown off-kilter because of irregular mealtimes and overeating will come back to normal. It helps relieve chronic fatigue, skin trouble, enteritis and allergies. Of course it is not a panacea for all diseases, just as pressing a “reset” button cannot eliminate persistent viruses.

Take some time to reflect how your life has been in 2005. Have you allowed your body a well earned break during the year? We are three days away from the New Year: why not press the reset button now to give your body a chance to recover its functions for a healthier, more active 2006.