Massachusetts, USA -- Back in 1979, a biologist at the University of Massachusetts named Jon Kabat-Zinn had an idea. He was trained in the Vipassana tradition of Buddhist meditation, and he had a hunch that if he pared-down the technique, it could help patients at the university's medical center. 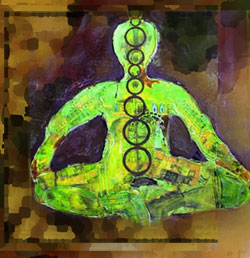 << Mindfulness, a concept at the heart of Buddhist meditation, is the basis of an eight-week course that's showing some success at helping people manage pain.

"The idea was to actually... train these medical patients in Buddhist meditative practices, but without the Buddhism," says Kabat-Zinn.

The idea of mind-body health wasn't well explored at the time, so Kabat-Zinn approached physicians and pain specialists at the university. He asked them to refer their patients to his new clinic, which happened to be set up in a windowless, underground office in a medical building.

"I wasn't objecting," says Kabat-Zinn. "Even with no air and no light and my wife saying, 'How can you work in these conditions?'" it didn't deter patients from seeking out the mindfulness training, either."

"The heart of Buddhist meditation is actually called mindfulness, and our operational definition of it is really paying attention in the only moment we're ever alive — which is the present moment," Kabat-Zinn says.

This can be tough for people living with pain. After all, who wants to be "in the moment" when your joints are aching, your head's throbbing, or you're living with a scary diagnosis? No wonder our first impulse is to run away. Bill Mies tried that.

Mies is a yacht broker from Annapolis, Md., with a full white beard. About a year ago, he started having shoulder and neck problems. He saw doctors who gave him injections and a physical therapist who prescribed some exercises, but he still wasn't completely better.

He eventually found his way to a mindfulness class in Baltimore, modeled on Kabat-Zinn's teachings. The course is now offered in dozens of hospitals and medical centers around the country, and studies suggest it does help people cope with the psychological distress of diseases, such as arthritis, psoriasis and cancer.

During one recent class, Bill Mies and seven other students practiced a technique called the body scan. Lying on mats and pillows wearing socks and comfy clothes, instructor Trish Magyari walked them through a sort of mental tour of the body.

"We'll travel down through the body bringing our awareness into our left foot," says Magyari. When people learn to stay with the scan, it becomes a useful trick or tool to shift your focus — whenever you need to.

"The point of it is to train our mind where we want it to go," Magyari says, instead of letting the mind wander into worry or be held hostage by the panic of pain.

Bill Mies finds the body scan extremely helpful at times, but acknowledges that during his most recent class, he was struggling.

"I found my mind drifting," he says. He found himself thinking, "I should be doing something more productive instead of paying attention to the sensations in my left leg."

Quieting these thoughts is a challenge for people just starting out, says Magyari. But the question is: If you can stick with it, does mindfulness training really help?

"I think the concept of who does it work for... depends on what exactly we're measuring," Magyari says.

Take for example, a small research study with 63 rheumatoid arthritis patients. After two months of mindfulness training, the patients' physical symptoms did not disappear, but they reported feeling better. Scores of psychological distress dropped 30 percent.

"It's true that not everyone's arthritis status changed," says Magyari. "However, the (patients) feel like they're coping with their arthritis much better than they were before."

The power to "stay in the moment" is not a gift. As Bill Mies is learning, it takes a lot of practice to get the benefits.

A Crash Course in Body Scan Meditation
by Vikki Valentine

Practice a seated body scan meditation with Trish Magyari. Follow along as she guides a class through the process.

NPR.org, February 28, 2007 · Trish Magyari is the instructor for an eight-week-long Mindfulness-Based Stress Reduction course, which teaches students a range of meditations. At the end, participants decide which meditation, or combination of them, motivates and relaxes them the most.

Although rushing goes against the rules of meditation, Magyari gives us a pass with this crash course on the body scan, one of the meditations taught in the course.

The purpose of the body scan, she says, is "to bring awareness to each part of our body sequentially, to see how it is today — not to check in to change or judge the body, which we're apt to do, but just to experience it and see what's there."

Block out at least 30 minutes of time and turn off your cell phone. Lie down in a comfortable place, such as your bed or a cushy mat on the floor.

Before you start the scan, notice the parts of the body in contact with the mat.

"People often notice what is pressing is their heads or hips, so before the formal scan, we imagine softening around those areas," Magyari says.

This is a chance to tune into and relax parts of the body that are holding tension ? such as the jaws, neck and shoulders, or even gripping in the calves.

Agree to let go of the past and future. Don't listen to the sounds around you. Let everything fade into the background but the body. Agree to meet what you find in the body with friendliness.

"Usually, when people find something in their body they don't like, they meet it with judgment; the body that's in pain is your enemy," Magyari says. "It's a very radical concept to meet the body with friendliness."

Imagine you're taking a tour of your body — looking to see what's there just today. Don't visualize or move your body parts; simply notice and experience them, one by one. Magyari says start with the left foot. Feel how the heel makes contact with the mat. Can you tell if your toes are colder than the rest of your foot? If you have a blanket over you or a sock on, notice the weight and texture of the fabric.

Once you scan over a body part, allow that part to fade from awareness. Let it go and then move up to the next body part: the ankle, the calf, the knee, the thigh. Then cross over the lower torso, travel down the right leg and start again at the right foot, and repeat, traveling up the body, part by part, until you reach the head.

Connect It All Together

After you scan the head, you want to connect the entire body together, says Magyari.

"Instructors give cues to help you feel the entire body," she says.

The final step is to feel the skin around the whole body, Magyari says. Notice the sensations on your skin ? temperature, texture.

"At the very end, we're lying with the awareness of our wholeness in that moment. We're not thinking about what's right or wrong with us, our state of health, but just that sense of physical wholeness," Magyari says.

People suffering from chronic pain often find some relief with the body scan, she says. Magyari recalls one patient who had been living with chronic pain for 20 years.

"Previously, her sense was, 'I just hurt everywhere,'" says Magyari. After two weeks of body scan training, the patient realized there were parts of her body that weren't in pain. That may not sound like much to some people, but for patients who see their bodies ruled by pain, Magyari says it's a refreshing discovery.

--------------------
For more on the body scan and the Mindfulness-Based Stress Reduction courses, refer to the University of Massachusetts Center for Mindfulness and to the book Full Catastrophe Living, by Jon Kabat-Zinn.