A different kind of meditation

Get in touich with Gil Alon's 'Creativities Workshop'

Bangkok, Thailand -- He asked us to laugh, cry, dance, talk gibberish and feel intense pain. He said this was part of boosting and re-connecting with the source of creativity in us all. 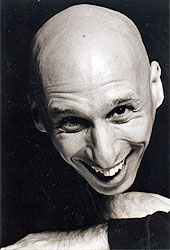 For years, perhaps since our childhoods, we have been programmed to live and think in "boxes", and in order to take them apart, Israeli theatre director/actor and Zen Buddhist teacher Gil Alon stressed that we have to first and foremost drop every idea of competition.

"Good or bad, to be number one or the best, these are just opinions," said the conductor of the aptly named "Creativities Workshop", an innovative training method that has become popular in Thailand over the past seven years. Every participant called this man, who resembles a monk with a shaven head, by his first name: Gil, which means "Happiness" in his mother language.

Initially introduced to Thailand by the Israeli embassy, Alon has been leading similar workshops - that can last from one to 10 days - for diverse groups of people around the country. His students (although Alon says he'd rather call them his teachers) include artists and actors, teachers, businessmen and women, media professionals, social workers and staff working with juvenile inmates. Between workshops, he finds time for his interest in theatre, from acting in Japanese butoh performances and directing a Buddhist play based on the Tripitaka, to staging a solo interactive play about cloning (which he scripted himself), and to talk about Zen Buddhism to anyone interested.

Alon's approach to creativity is based on the belief that it is endless, innate and closely intertwined with the concept of love.

"Being creative is doing what we love to do. It doesn't mean you won't have problems. But loving what we do will help us overcome difficulties; it will make it a little easier to deal with them."

The word "love" is repeated throughout the workshop. One good piece of news is that you don't have to be an artist in order to be creative, he says. The Creativities Workshop consists of a series of journeys into the unknown - where each participant will discover his or her hidden talents buried underneath the boxes - or "garbage", as Alon calls it. In virtually all the sessions we don't know what we are going to do until the very moment of action. Neither are we told what is expected of us, even afterwards. How could it be otherwise? For every experience will be personal, and different. Who can judge whether it is negative or positive?

Alon does not put descriptive labels on any emotion. Again, he says, the terms "negative" and "positive" are just opinions (another favourite word of his). Everything we feel, every experience we go through, he stresses, is correct in its own right. What Alon's workshops aim to achieve is to enable each person to explore his or her basic, primal feelings - love, anger, fear - by making them a little bigger in order to look at them more deeply. Sounds like meditation? Certainly not the routine type.

One session is called "The 99-year Prison". Somehow the combination of music and atmosphere draws an interesting mix of reactions from participants. People who usually appear cool and peace-loving can surprisingly show their dark, angry sides. There is a lot of yelling, crying and bemoaning injustice (they are supposedly thrown in jail for a wrong they think they have committed in the past). Often, the experiment threatens to erupt into violence. The scene looks like a microcosm of the most frightening concentration camp you can imagine ... or even the state of the world, come to think of it.

But several other sessions reveal the opposite: Moving pathos. Tears often flow at the end of the "Hugging" period. Similar effects unfold in "Rebirth" - when, for a few minutes, everyone is turned into a baby, on its way out of the womb. The sheer sight of such a pure, vulnerable creature, whose destiny is still undecided, seems to induce a natural feel of indiscriminate goodwill, perhaps love, towards that person. Alon says the length of time we have known each other is not a factor in this expression of a universal sense of benevolence.

The original idea for Rebirth came from some classes on Zen Buddhism he took while in Israel. Alon has since travelled to the East - India, South Korea, Japan and Thailand - where he was exposed to different schools of Buddhism. (In 2000, he was named the dharma heir to Gudo Wafu Nishijima, leader of the Dogen Sangha, a global sect in the Soto Zen tradition.)

The workshops he leads have a definite Buddhist flavour, with ideas of emptiness, inter-connectedness and metta (loving-kindness) cleverly conveyed through the different tasks given to participants. How does Alon link Buddhist teaching with exploring people's imagination?

On another occasion, Alon talked about a particular flow of energy that connects us all. Some religions call it the life-force, God, dharma, or just love. We lie to ourselves when we think that we are separate entities. Take a glass, for example: It is a combination of many other things. Likewise, our survival depends on the water, air, the sun and so on. Alon thus stresses "oneness", and how every action influences everything else. Awareness of this truth nurtures a kind of love that is responsible, unconditional and yet not binding.

"Most people, when they say 'I love you', actually mean 'You are mine,"' he noted. "When a parent says, 'I am proud of my child,' what he or she means is that 'I am proud that my child is a copy of me.'

"But we all know that we've come to this world with nothing, and when we go, we go with nothing. So actually nothing is ours. When we try to control or own, our partner or children, from the Buddhist point of view, this is not love. This is emotional business."

At the same time, Alon departs from most other religious tenets that espouse ideas of loving others. He argues that we have to start from loving ourselves first.

"But loving oneself first doesn't mean not caring about others. Loving oneself is to be connected to your heart, intuition ... to stop worrying too much about others' opinions. When you follow your heart, you will become a happier person and you will always want to share your happiness with others. You won't be selfish."

But what about those who still don't feel they have found what they love to do? Alon has a very simple answer: "The only way to know is to do. You try. If you think you have come the wrong way, then you have learned a lesson. Then change it. There is nobody to tell you that at such-and-such age, you have to decide [what you like to do]. Life is a lesson. Explore life with joy."

Perhaps the root cause of the world's problems come from the fact that there are too many unhappy people, those whose lives have been confined to boxes, to the rat race.

One curious phenomenon in Israel is the proliferation of live theatre: There are about 2,000 to 3,000 productions a year in a country with a population of about 6.5 million. Alon noted how theatre has been part of every Israeli's education. He does not know why. He ventured that it is much cheaper than making a movie. It could also be due to years of living in conflict - when people are stressed, they have to express, they have to create, said the man who has been acting since he was 16.

Theatre thus holds a lot of potential - but there are limitations as well. Alon mentioned an interesting production that cast a Palestinian actor as Romeo and an Israeli as Juliet. A few years ago, he played Hitler, exploring the Nazi leader's human side.

"He was not a monster from the moon," Alon noted. One of his yet-to-be-fulfilled dreams is to conduct a Creativities Workshop for world leaders. Think of US President George Bush hugging Osama Bin Laden. Or serried rows of corrupt politicians being turned into innocent babies. How much for the better could we wish for change?

"Of course, one workshop cannot solve problems," Alon said pragmatically. "It cannot be the only thing. Actually, I have been working more with actors from Israel and Palestine. And there are no problems. Actors are people who can work together all the time."