A rather eccentric former hippie discovers the secret to wellbeing in an ancient Tibetan practice.

Kuala Lumpur, Malaysia -- WINFRIED Rode is an interesting individual. When you meet him, the 58-year old will strike you as some sort of David Carradine wannabe (remember Kung Fu: The Legend Continues?). His long greying hair is tied in a ponytail and he’s dressed in the robes of a Tibetan monk. 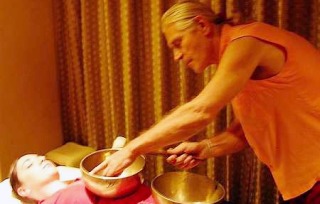 << Rode uses bowls that emit different frequencies to correct ‘imbalances’ in his patients.

His weapon of choice, however, is neither the kung fu kick or the fortune cookie philosophy. Rode is a practitioner of the ancient art of using Tibetan bowls for healing and the self-styled “Tibetan singing bowl master” was in town earlier this month to conduct a series of therapy sessions at The Spa at the Mandarin Oriental hotel in Kuala Lumpur.

In an interview, I learn about the life of this fascinating man who is now making a living reviving a little known art that was practised by ancient Tibetan Buddhists.

“I was a German hippie who left my native town of Dortmund to search for something in the mid 1970s,” he recalls, with a pronounced stutter. “I had studied Classical Greek and Roman philosophy in search of answers, but like many of my generation, my search led to India, and eventually I met a group of Tibetan exiles in Dharamsala.”

“There were many monks studying under the Dalai Lama, whom I eventually met, and became a disciple of. I knew that I had experienced healing when I met the monks, and that my search had ended.

“There was a lot of unhappiness in my childhood and young adulthood partly because of my speech impediment, but finally through karmic intent I found my home. In the late (19)70s I became a Buddhist monk.”

However Rode’s interesting life journey had a few more interesting twists to take. He left the monkhood in the early 1980s and married a German doctor working in India.

The couple, who separated five years ago, have two children (one of whom has followed in Rode’s footsteps by becoming a monk) and two grandchildren.

In the early 1990s, Rode found himself a singing bowl teacher in Nepal and after years of studying the ancient art, he became a fulltime practitioner in 2002.

While Rode does find it hard transporting his arsenal of bowls (he uses about a dozen bowls for each healing session), he now juggles his time between his base in Koh Samui, Thailand, and a home in Landsberg, Germany. Amazingly, he is also a seasonal theatre director in Germany!

“I don’t see a conflict between the various aspects of my life,’’ he says. “I now travel a lot with my work as a therapist, and I basically see it as my life’s work to bring people inner peace.”

Although what Rode practises may be centuries old, but surely there are some who dismiss it as mumbo-jumbo?

“Yes some call me a crazy yogi, but I believe that sound and light are universal. There are scientific explanations for why certain frequencies (emitted by the different bowls) provoke a better reaction in some people.

“The racing of the pulse, the perception of a colour ... this is all scientific information that enables me to make a diagnosis.”

“Besides there have been so many positive responses to my therapy that I don’t question the value of it.”

So what does a healing session involve?

Rode asked me to first allow myself to be blindfolded and then lie face down on a table in the Spa. He doesn’t speak much but his voice is soothing. He then strikes a series of metal bowls of different shapes and timbres while focussing on certain parts of my body and asking me to visualise a coloured ball of light.

According to Rode, these bowls, which are made of seven precious metals (including iron, lead, silver, gold, mercury and copper) have different frequencies that resonate with certain points of our body. The Buddhist Tantric system teaches that there are five chakras (energy points) in the body.

The last is the crown (top of the skull) which correlates to the colour white and has a positive quality of compassion and a negative emotion of distraction and desire.

By Rode’s reading, my inability to picture green and white indicated confusion which arose out of greed. I apparently also responded very stiffly to the treatment, leading him to deem me among the top 10% of patients he has treated who lead stressful and cluttered lives.

He also said that I had a good heart, but was now caught in a situation where I had to make judgements that were against my nature!

I must admit it felt rather surreal given some of my predicaments, and I was pondering how much of his “reading of my body” made sense, or if it was simply general enough to apply to anyone. Rode’s explanation that “bones are the best lie-detector” was rather eerie when he hit the nail on the head by saying I had sleeping problems since I was a child.

Rode’s final “solution” was that someone like me required at least three further sessions and had to be able to visualise a protective light blue colouring. Apparently, my life would be a lot easier if I listened to classical music in D minor!