Mississippi, USA -- Did you hear the one about the rabbi, imam, priest and swami? Well maybe not, but I bet you've heard many religion jokes of many varieties. 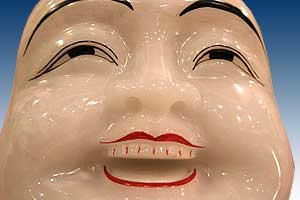 << The laughing Buddha, seen in many statues and pictures, is a great example of a religion's embrace of humor

It's true that our world is full of heartbreaking disasters and serious problems, and religions are often there addressing them, or even causing them. But as this year ends and our American culture is in the middle of our most festive season, I thought it would be fun to pause and smile. After all, one of the oldest meanings of "festive" is jovial!

Anthropologists have found that humor is a part of every culture, though just what things are funny varies greatly. Studying what's funny can be a lot of fun, but also difficult - we've all been in those situations of trying to explain a joke that ends by saying, "I guess you just had to be there." Imagine trying to understand the humor of an ancient civilization - it's very hard to be there!

Religion, like humor, is widespread in cultures, and even though certain dour forms of religion have made the stern, humorless minister a stereotype, religion and humor are often combined. After all, most religions are presented by their practitioners as a path to, or of, happiness, and what could be happier than deep, enjoyable laughter?

The laughing Buddha, seen in many statues and pictures, is a great example of a religion's embrace of humor.

This form of Buddha is based on an eccentric and apparently jovial wandering monk of the 9th century known as Hotei in Japan and Pu-Tai in China. He is often pictured holding a bag filled with various things - gold, food for the hungry, or candy, and often he is surrounded by children.

This reminds us of Jolly Ole St. Nicolaus and the legends that grew up around this Christian figure of the 3rd century. I am not aware of joke-telling legacies of Hotei or Nicolaus, but they are both certainly known for laughter.

In Jewish tradition, from as far back as we can read, humor abounds. In the last several decades biblical scholars have been paying attention to the jokes and humor of ancient Israelite literature, such as the book of Genesis, where one of the main character's name is "Laughing," known in English as "Isaac." Isn't it unfortunate his funny name gets lost in translation? And Jewish religious texts of centuries later are peppered with crazy stories and funny antics that still induce laughter.

Humor, it turns out, is not just fun, it's serious. Peter Berger, in his enjoyable work on humor and religion, Redeeming Laughter, describes the ways religious humor is used for wit, or weapon, for diversion, or consolation.

Turns out, humor is not just a minor matter, it's important. If nothing else, the religionist who is unable to laugh at herself, or takes himself too seriously, surely hasn't looked in the mirror a whole lot!

Maybe the next time we hire or engage a minister, priest, rabbi or guru, for a position, we should ask them to tell their best jokes.

So, what did Santa Claus say to the Laughing Buddha? I don't know, but it must have struck a nirvana!

--------------------------
James E. Bowley is chairman of religious studies at Millsaps College in Jackson. He is the author of books on the Bible and the Dead Sea Scrolls. His new book is Introduction to Hebrew Bible: A Guided Tour of Israel's Sacred Library.