Middletown, Connecticut (USA) -- Buddha’s story about how blind people visualize what they can’t see pops up unexpectedly in physics professor Chandrasekhar Roychoudhuri’s new book, most of which is devoted to what he describes as “hard core optics.” 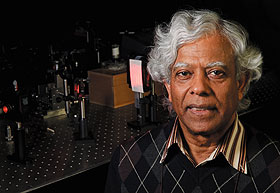 << Physics professr Chandra Roychoudhuri in his lab at the Depot Campus. Photo by Peter Morenus

While much of The Nature of Light – What is a Photon? with its discussion of quantum physics and complex mathematical formulae, is intended for advanced scientists, several sections “are for anyone who enjoys thinking,” Roychoudhuri says.

To illustrate one of his central points, that no single person can understand all the complexities of nature, he draws on the familiar story of six blind men attempting to “know” an elephant by touching it.

In the story, the men, blind from birth, each touch different parts of the elephant and reach conclusions based solely on their experience in touching the tail, trunk, or legs. Later, each man avers that his view of the elephant is the only true one. After debate, they pool their knowledge and develop a remarkably close description of the animal.

The ancient story’s lesson holds true today, Roychoudhuri says. “We fool ourselves by assuming that our cerebral interpretation of sensorial inputs, including our eyes, is the objective reality of this world.”

In an interview, Roychoudhuri tied together physics, photons, and the relationship between the human quest for knowledge and the natural world.

Physics, he said, deals with the meaning and purpose of the universe. Its “language” is usually expressed in logical mathematical equations. Photons are units of light. They figure prominently in Roychoudhuri’s world view because the human brain is vision-oriented, and light is a requirement for vision.

Roychoudhuri parts company with many other physicists in his view that a “cosmic logic” must figure into our efforts to understand the world around us. He laments that various branches of physics each embrace their own “truths,” rather than blending the wisdom of each specialty in a holistic way.

“The same laws of the universe apply in all fields, and we can refine our theories most efficiently by reaching out to each other as Buddha’s blind men did,” he says.

One of Roychoudhuri’s central themes is that there is often a contradiction between the natural world and the one that man observes – or at least thinks he observes.

He offers a rainbow as an example. A physicist talking about a rainbow will speak of refraction, reflection, and the dispersion of electromagnetic waves by water droplets in clouds.

To better understand the rainbow, one needs to ponder human genetics, Roychoudhuri argues. Unlike other animals, humans over time developed massive frontal lobes that could do much more than merely help ensure survival.

The long list of capabilities in all our genes includes being able to “see” colors in a rainbow, appreciate the rainbow on many levels, and even invert its image from the upside-down position in which it is displayed on our retinas.

The human genome is at once a blessing and a curse, Roychoudhuri suggests. The genome has benefited from millennia of evolution, advancing humanity in manifold ways.

But the logic and instincts that humans have learned to trust throughout their history can be misleading, at least from a physicist’s perspective. For example, evolution lets species with eyes “see” colors that to a physicist are actually different frequencies.

To illustrate how the same physical laws apply to the biosphere and to social organizations, Roychoudhuri cites today’s economic crisis.

He said it is an especially vexing problem to resolve because world economies are based on a shaky foundation – the notion that growth must be perpetual. In nature, he says, the biosphere is based not on consumption, but on recycling and reuse.

Roychoudhuri’s model for physics calls for discovering and visualizing the invisible interactions occurring in nature. Better understanding of actual processes might help man avert potential crises such as cataclysmic climate change, he adds.

“Right now, our organized bodies of knowledge are necessarily incomplete, as they have been constructed based on incomplete knowledge of the universe,” he adds.

“All new knowledge is created and built on existing and past knowledge. If we consider the past working rules as ‘frozen’ and ‘religiously’ correct, we will not be able to get closer to cosmic laws.”