San Francisco, USA -- While there are numerous ideologies connected with the study of how meditation influences the brain, one of the most prevalent is that of Buddhism, which has birthed many of the meditative techniques studied and published in the scientific literature. 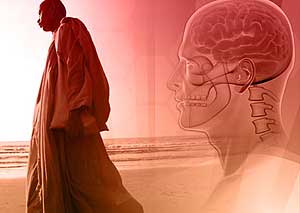 The Buddhist approach to the mind-body problem, in general, has been one that acknowledges the essential unity of body and mind while emphasizing consciousness, or interior subjective awareness, as primary. In Mahayana Buddhism, for example, the body is seen as the densest layer of a spectrum of being that ranges in quality from the dense (body) to the subtle (mind) to the very subtle (pure awareness without thought). This very subtle quality, often referred to in Zen Buddhism as Big Mind, is considered to be the essential quality of all things, even the body.

In this view, because Big Mind, or pure consciousness, permeates virtually all things, there can be no actual duality between mind and body. In other words, though they differ superficially in quality (i.e., one is gross in quality and the other subtle), they are not essentially different in quality. And while consciousness is said to be primary, this is not to say that it is a kind of first cause, as that would again propose a duality between the first cause and that which is caused; and Buddhist philosophy states the reality of things to be fundamentally nondual—absent of any subject-object duality. So, while a growing number of contemporary neuroscientists adopt a material monist view that reduces all mental phenomena to brain processes, Buddhism tends to adopt a non-material monist view that sees formlessness as the ultimate substrate of inner experience.

The third-person methodology of scientific empiricism generally does not trust subjective or inter-subjective experience, often refusing to even acknowledge this interior world as a real domain in its own right, when considering theories of causation in mind-body interaction. A good example of this common oversight is the diathesis stress theory regarding anxiety disorders, which is predominantly taught at many colleges and universities. This theory often refers to stress as occurring “in the environment.” Yet stress categorically does not occur in the environment, as it is an internal, subjective, and therefore very individual, response to external stimuli. Furthermore, the external environment is not identical to the internal environment of experience, so that nurture, often equated only with the external environment, includes not only outward surroundings but inter-subjective nurturing and shared meaning as well.

This qualitative difference between internal and external environment, according to Daniel J. Siegel (2007), is precisely why individuals placed in the exact same physical environment exhibit very different internal responses. These differences, be believes, can be traced to the quality of attunement—the inter-subjective focus of attention on the interior experience of another—we underwent in infancy and childhood (xiii). He theorizes that intrapersonal attunement—that is, a feeling of connection and attunement with oneself (such as that cultivated through Buddhist mindfulness meditation)—may “lead the brain to grow in ways that promote balanced self-regulation via the process of neural integration, which enables flexibility and self-understanding” (p. xiv, emphasis mine).

A study of Tibetan Buddhist monk Lama Oser, as related by Daniel Goleman (2003, pp. 1 - 27), demonstrates this cultivated interior flexibility quite well. When viewing a disturbing video featuring a burn victim whose skin was being surgically removed, Oser’s response, unique and atypical, showed that he was even more relaxed while viewing the video than he was during baseline monitoring. His interior subjective response was decidedly the product of extensive training in meditation on compassion.

The Buddhist approach to subjectivity’s suspect nature is to train subjective awareness and hone it into an instrument worthy of empirical research into the relationship between mind and body. Buddhist philosophy has always maintained that when such training is pursued carefully for some time, the cultivation of mental and emotional well-being can result. To cultivate such well-being, however, requires first that subjective interior experience be acknowledged as a legitimate domain of reality.

Goleman, Daniel. (2003). Destructive Emotions: How Can We Overcome Them? New York: Bantam Dell.

Eric Thompson is an Examiner from Denver. You can see Eric's articles on Eric's Home Page.