Seoul, South Korea -- If you are of the increasing health-conscious folks, temple food should be on your check list. 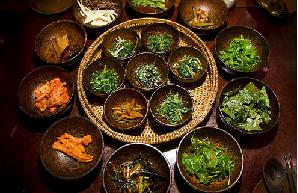 To know what it looks like, you don’t have to go to a remote mountain where temples are usually located. There’s one right here in the middle of the central Seoul area, right across from the Jogye Temple.

There, Ven. Dae An runs a restaurant, called Baru. It serves meals with fresh ingredients directly from various mountains such as Mt. Jiri, Mt. Odae, and Mt. Seorak, while the pepper paste, bean paste, and all the other sauces are made at Geumsuam Temple from the Mt. Jiri.

Temple food experience offers more than a handful of choices. “I have about 1,000 recipes right in my head. Some 400 of them were created by me,” she said in an interview with Chosun Ilbo Saturday.

You can bet that she is personally attached to her work. And there is a good reason.

Earlier in life, she suffered from goiter, an enlargement of thyroid gland. Medicine didn’t work. She turned to religion.

As she spent more time at temples, she also got to know different temple foods ? all made from fresh vegetables in the mountains. She enjoyed eating temple food. She also started making her own tofu, and also grew bean sprouts as a starter.

After completing a 1,000-day prayer, and eating temple food, her illness was gone. Her overweighed body also returned to normal. And she became a ``bhikuni.’’

She wanted to share the healthful benefits of temple food with more people. So, after a one-year preparation, she opened Baru last year.

Expectedly, they are all vegetables, no meat. “Buddhists see eating also part of a religious practice. And the foundation of the practice is to nurture benevolence. Benevolence means no killing.

“It’s problematic to see other animals’ flesh as a food. The whole life in the world is one organically,” she said.

Recently, she has been advising on a few special menus, specifically geared for patients, for example, suffering from cancer and diabetes.

Even though she is a specialist on temple food, she believes ultimately the cure comes not from eating the food, but from one’s state of mind.

“Letting go of your ego and selfishness is the fundamental foundation of Buddhist practice and also the philosophy behind vegetarian diet,” she said.