San Francisco, CA (USA) -- Positive psychological changes that occur during meditation training are associated with greater telomerase activity, according to researchers at the University of California, Davis, and the University of California, San Francisco. The study is the first to link positive well-being to higher telomerase, an enzyme important for the long-term health of cells in the body. 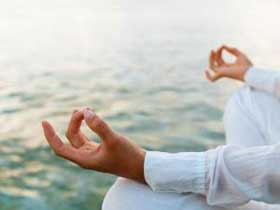 The effect appears to be attributable to psychological changes that increase a person's ability to cope with stress and maintain feelings of well-being.

"We have found that meditation promotes positive psychological changes, and that meditators showing the greatest improvement on various psychological measures had the highest levels of telomerase," said Clifford Saron, associate research scientist at the UC Davis Center for Mind and Brain.

"The take-home message from this work is not that meditation directly increases telomerase activity and therefore a person's health and longevity," Saron said. "Rather, meditation may improve a person's psychological well-being and in turn these changes are related to telomerase activity in immune cells, which has the potential to promote longevity in those cells. Activities that increase a person's sense of well-being may have a profound effect on the most fundamental aspects of their physiology."

The study, with UC Davis postdoctoral scholar Tonya Jacobs as lead author, was published online Oct. 29 in the journal Psychoneuroendocrinology and will soon appear in print. It is a product of the UC Davis-based Shamatha Project, led by Saron, one of the first long-term, detailed, matched control-group studies of the effects of intensive meditation training on mind and body.

"This work is among the first to show a relation between positive psychological change and telomerase activity. Because the finding is new, it should serve to inspire future studies to replicate and extend what we found," Jacobs said.

Telomeres are sequences of DNA at the end of chromosomes that tend to get shorter every time a cell divides. When telomeres drop below a critical length, the cell can no longer divide properly and eventually dies.

Telomerase is an enzyme that can rebuild and lengthen telomeres. Other studies suggest that telomerase activity may be a link between psychological stress and physical health.

The research team measured telomerase activity in participants in the Shamatha Project at the end of a three-month intensive meditation retreat.

Telomerase activity was about one-third higher in the white blood cells of participants who had completed the retreat than in a matched group of controls.

The retreat participants also showed increases in such beneficial psychological qualities as perceived control (over one's life and surroundings), mindfulness (being able to observe one's experience in a nonreactive manner) and purpose in life (viewing one's life as meaningful, worthwhile and aligned with long-term goals and values). In addition, they experienced decreased neuroticism, or negative emotionality.

Using statistical modeling techniques, the researchers concluded that high telomerase activity was due to the beneficial effects of meditation on perceived control and neuroticism, which in turn were due to changes in mindfulness and sense of purpose.

The Shamatha Project is the most comprehensive longitudinal study of intensive meditation yet undertaken.

The intensive meditation retreat took place at the Shambhala Mountain Center in Red Feather Lakes, Colo. The study included 30 participants each in the retreat and control groups. Participants received ongoing instruction in meditation techniques from Buddhist scholar, author and teacher B. Alan Wallace of the Santa Barbara Institute for Consciousness Studies. They attended group meditation sessions twice a day and engaged in individual practice for about six hours a day.

A control group of 30 people matched for age, sex, education, ethnicity and meditation experience was assessed at the same time and in the same place, but did not otherwise attend meditation training at that time.

The Shamatha Project has drawn the attention of scientists and Buddhist scholars alike, including the Dalai Lama, who has endorsed the project.

Saron and his colleagues are now analyzing and publishing other findings from the project. In a paper published this summer in Psychological Science, Katherine MacLean, a recent UC Davis Ph.D. graduate now at Johns Hopkins University, reported that meditators were better at making fine visual distinctions and sustaining attention over a long period.

The group's next research article, currently in press in the journal Emotion, will describe a meditation-related reduction in impulsive reactions, which was linked in turn to enhancement in positive psychological functioning. UC Davis postdoctoral researcher Baljinder Sahdra is the lead author on that paper.

----------
Science Daily Editor's Note: This article is not intended to provide medical advice, diagnosis or treatment. The above story is reprinted (with editorial adaptations by ScienceDaily staff) from materials provided by University of California - Davis.