ASTANA, Kazakhstan -- Kazakhstan today is a mostly Muslim country, but the Silk Road that crossed it was an important conduit for religions, including Buddhism, and some of Kazakhstan’s historic carvings and monuments are neither Muslim nor animist, but homages to Buddhas, bodhisattvas and the monks who carried their teachings from India and China across the Eurasian landmass. 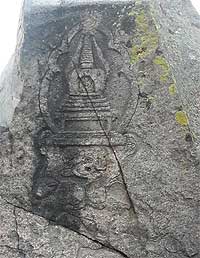 Buddhism gained a large following in Central Asia between the second century B.C. up to the coming of Islam to the region around the eighth century, and many of the Turkic peoples living in Kazakhstan adopted it. Though now the Buddhist population of Kazakhstan is small – only about 0.5 percent of the population as of 2007 – the country has the largest number of Buddhists in Central Asia. It is also dotted with remnants of its Buddhist past, particularly in the Zhetysu (“seven rivers”) area of modern-day southeastern Kazakhstan, which includes today’s Almaty oblast and historically extended into Kyrgyzstan.

Within that area are the Tamgaly-Tas (“Stones with Signs”), one of Kazakhstan’s most popular tourist destinations and a UNESCO World Heritage site. The cliffs, about 120 kilometres from Almaty, are marked with thousands of rock paintings and carvings dating from the Bronze Age onward. Among the hunting scenes and animal figures are carvings of the Buddha, Buddhist mantras in Sanskrit and pictures of important Buddhist teachers.

Local legend has it that a Buddhist mission had stopped by the banks of the Ili River under some rock cliffs when a sudden earthquake caused a hunk of rock to fall from the cliffs near them. In gratitude at their deliverance, they created the largest Buddha image there, facing the sky from a large, sunblasted rock, before they continued.

Elsewhere in Almaty oblast, the Kora River bursts through the mountains near the town of Tekeli. In the nearby river valley is a large, pyramid-shaped rock with Buddhist images carved into it. Surrounded by a well-beaten path, the rock’s images are complex and reflect many aspects of Tibetan Buddhism. There is a stupa, a snow lion holding a stupa (the snow lion often represents cheerfulness, clear-mindedness and fearlessness in Tibetan Buddhist traditions), and symbols representing a Buddhist concept of cycles of time.

The path around the stone may indicate that passing Buddhists have practised walking meditation around it, venerating the object. This practice may also be an example of cultural borrowing between Buddhism and Islam in Kazakhstan: Kazakh sufis also walk around shrines and graves. They may meditate using mantras and breath cycles, often practice in small communities centred around a master and believe in rebirth and some other concepts associated with Buddhism.

One visitor, the mountain climber and tour leader Andrey Gundarev, pointed out that the word “kora” – also the name of the river – means “circumnabulation” or “revolution” in Tibetan and refers to a walking meditation practice.

Not far from the monument is the Kayalyk settlement, the remains of an 8th – 13th century Silk Road city, and a World Heritage site since 2014. Now mostly earth and stone foundations, there are the remnants of several religious buildings, including a Buddhist temple, at the site, roughly 200 km from the regional centre of Taldykorgan.

It is possible that many Buddhist and other artefacts remain to be found across Kazakhstan’s huge territory. Near Sairam, in the South Kazakhstan oblast, an underground structure has been discovered that scientists believe may be a sixth century Buddhist temple.

Two sets of less ancient ruins, dating from the 17th century, may have been built at the behest of two

brothers: the Kalmyk leaders Ablai-taisha and Ochirtu-taisha. (The Kalmyks, also called Dzungars, were a tribe that left Dzungaria in northwest China in 1607 and took control of portions of what is now Kazakhstan.)

In Karakuly National Park in Karaganda oblast are the ruins of a Buddhist monastery now called Kyzyl Kensh Palace – “Red City” or “Red Ore” in Kazakh, named for its painted red walls. The ruin’s origins are still unclear: one theory says they’re the remains of an ancient Buddhist temple; another says they’re what is left of a 17th century monastery founded by Ochirtu-taisha, who lived there. Another theory posits an 18th century origin as a fort built by Buddhist Kalmyks trying to hold their territory.

The ruins remain a dark place for local residents – touching them has been thought to bring death or bad luck, according to a report on the Culturemap.kz website. Into the 20th century, some walls remained standing, but today only the foundations remain, though some restoration work has been done.

Not far from Ust-Kamenogorsk city is another set of 17th century ruins: the Ablaykyt Monastery, built between 1654 and 1656 by Ablai-taisha but demolished in 1670. Only the stone wall ringing the old fortress and religious site remains.

A related temple is now gone, but lives on in the name of Semey, formerly Semipalatinsk (“seven palaces”) – named for the seven-halled Buddhist temple on the old settlement of Dorzhinkit, where today’s Semey is now. The temples were destroyed in the latter part of the 17th century.

Kalmyk monasteries were once widespread in eastern Kazakhstan and the Zhetysu region, but as many monastery complexes were collections of yurts, little remains of them. The Kalmyks, however, took their religion with them when they left Kazakhstan: today, the Republic of Kalmykia, a semi-autonomous region of Russia, is the only European nation where Buddhism is a plurality religion.