Yokohama, Japan -- The massive, by Japanese standards, protest against the restart of the Oi nuclear reactors which took place Friday night (June 29) in downtown Tokyo in front of the parliament building and the official residence of the prime minister felt different, historic even, and perhaps a watershed in Japan’s now two decade struggle to find a new post-industrial social paradigm. 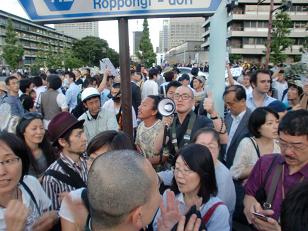 << Rev. Kobo Inoue leads the call "Against the Start Up"!

What was different that stood out was: A marked increase in diversity of the participants

Most of the demonstrations I have attended since April of 2011, shortly after the Fukushima incident happened, have been dominated by long time social activists over the age of 50, often representing labor groups but also including the wide variety of citizens groups that have arisen over the last 15 years in Japan.

Demonstrations that have been held in the western parts of Tokyo near trendy centers of youth such as Shibuya, Harajuku and Shinjuku have often been well attended by the increasing numbers of furita/freeter.  These are young Japanese in their 20s and 30s who have dropped out of mainstream employment in companies and are developing various types of alternative lifestyles. Their numbers are estimated somewhere between 4 and 8 million people. However, within minutes of arriving at the protest site last Friday, I noticed a greater diversity, especially young working professionals who have generally kept quite a distance from previous demonstrations.

Although less conspicuous, I also noticed for the first time at an anti-nuclear demonstration a university students group which was acting as a coalition of groups from different universities. While many university students did become involved in volunteer relief work in the tsunami affected areas, they have generally shown no interest in becoming involved in the nuclear issue. They have appeared not only fearful of endangering their job prospects by getting involved in civil disobedience but also completely out of touch and apathetic with social issues that go beyond their own interests in personal advancement.

For foreigners, especially Europeans accustomed to taking the streets about social issues, participating in a demonstration in Japan feels like a shocking mockery of the very concept of public protest and civil disobedience. Almost all demonstrations in Japan are planned in advance with the consent of the police. While providing assistance and tacit protection against small groups of right-wing fanatics, they also ensure that the demonstrations follow their prescribed routes and do not inconvenience the normal flow of traffic or public life in the streets. The demonstration on June 29 was my first experience counter to this.

As the numbers continued to swell from 5:30 to 7:00 pm, the protest could not be contained on the sidewalks or even one lane into the street. By 7:00 there was a dual push by the now massive crowd, probably in the neighborhood of 40,000 though estimates vary from 17,000 to 150,000. One group at the top of the hill surged into the road in front of the prime minister’s residence forcing the police to move armored buses across it to block them. Meanwhile a second surge occurred at the bottom of the hill in front of the parliament building. And suddenly the entire street of some 400 meters in length had been taken over by the crowd, cutting off all traffic and leaving the police relatively helpless to re-establish order.

While the protest did end in a timely manner at 8:00 with the typical civility of both police and protesters, there was some anger amongst the demonstrators themselves towards the organizers who cooperated with the police and used their loudspeakers to tell everyone to go home. Their reasoning was so that future protests would not be forbidden. However, many felt with the restart of the Oi reactors only 48 hours away that the future was right now and voiced their displeasure to these organizers.

From this writer’s own personal interest, this demonstration was the first at which a coordinated group of Buddhists participated beyond the regular activism of the small Nipponzan Myohoji order. A small but not insignificant group of 8 Buddhist priests and at least 5 lay followers representing AYUS (a Japanese Buddhist development NGO increasingly involved in the nuclear issue) and the Japan Network of Engaged Buddhists (JNEB) gathered amidst the crowd and, holding high the Buddhist flag, maintained a presence throughout the demonstration.

From the moment I arrived at the site at 5:30, I quickly found a small group of Nipponzan Myohoji priests and lay followers through the sound of their drums. As a way of orienting myself to the situation, I followed them through the streets as we chanted the daimoku, refuge to the Lotus Sutra. After connecting up with our other Buddhist friends, we camped out for an hour on the corner of Roppongi Avenue, the entrance to the street on which the parliament building and the prime minister’s residence is located. Spontaneously connecting with a group of furita, we engaged, as did the entire crowd, in chants of “Against the Start Up”, with one of our members Rev. Kobo Inoue, a Jodo Pure Land priest, grabbing a bullhorn and leading the crowd. By 7:00 we began to move up the hill and take part in the push to take over the entire street in front of the parliament building. Along the way, we met up with Rev. Hidehito Okochi, a Jodo Pure Land priest and longtime anti-nuclear activist and NGO leader, carrying his banner expressing the incompatibility of the Pure Land and nuclear weapons and energy. As we moved up the hill to the demonstration’s peaked conclusion in front of the armored buses at the entrance to the Prime Minister’s residence, I kept running into followers of the Nipponzan Myohoji and their endless chanting and drumming of refuge in the Lotus Sutra.

While our numbers may have seemed insignificant, our coordinated presence was symbolic of the Japanese Buddhist world’s increased interest and activism in the nuclear issue. It took over 6 months for any Buddhist denomination to make a public declaration on the Fukushima incident and nuclear power in Japan. Subsequently, the Japan Buddhist Federation, representing all the traditional sects, made an official anti-nuclear statement on December 6, 2011.

Since then, the monastic congresses of numerous Buddhist denominations (such as Soto Zen and Jodo Shin Otani Pure Land) made critical declarations in February of this year on the future use of nuclear power in Japan and also adopted platforms and specific regulations on the use of alternative energies within their own denominations. Jodo Shin Otani, one of the three largest traditional Buddhist denominations in Japan, also made a public appeal to Prime Minister Noda on June 12th to not allow the restart of the Oi reactors. Rev. Taitsu Kono—the present Chief Priest of the Myoshin-ji sect of the Rinzai Zen denomination and recently retired President of the Japan Buddhist Federation—has also become an increasingly popular figure in the media for his connecting the complicity of Japanese Buddhists in World War II to their complicity with nuclear power.

All these actions are very much in the wake of the leadership shown by the small Inter Faith Forum for the Review of National Nuclear Policy, of which the aforementioned Rev. Okochi is a leader. The Forum has brought together Buddhist, Shinto, and Christian priests to grapple with the nuclear issue since 1993. In mid-April, they held a major three day symposium in Fukushima bringing together citizens, local activists, and Buddhist priests all working to cope with the ongoing crisis there. They also responded to the increased effort of the Noda administration to restart the Oi reactors by creating an ecumenical rally of 100 religious leaders at the Fukui prefectural offices on May 30 to petition the local government to reject Tokyo’s push for the restart. This event was well covered by the mass media, which has a tendency to ignore the social efforts of religious groups.

Whether the protest of June 29 becomes a watershed or not is still not easy to discern as the conservative center of Japanese society continues to appear unmoveable. However, now more than a year after the events of 3/11, the nuclear issue has not faded away. Despite an inconsistent civil protest movement since that time, there appears to be a continually growing sentiment against nuclear power, as seen in two-thirds of Japanese polled as against the restart of the Oi reactors. This sentiment is very symbolic of a much larger trend in Japan—a kind of social awakening, perhaps not seen since the mass disillusionment with the government at the end of the World War II.

A young housewife and mother at the June 29th demonstration was quoted as saying, “Japanese have not spoken out against the national government. Now, we have to speak out, or the government will endanger us all.” (New York Times, June 29) For some four decades, Japanese have thought nuclear power was safe, because the government and the big companies - standards of this nation and its people - were  operating it. This long held sentiment that the government and the big companies were looking out for the best interest of the people has been deteriorating over the last decade of economic failure and structural readjustment. Since the Fukushima incident, the public exposure of the nuclear village - the collusive alliance of government, big business, scientists and academics, and media - has seen this sentiment hit a new low. With or without its government, the people of Japan seem to be ready, and perhaps even eager, to move forward into a new future that not only ensures environmental integrity but also the lifestyle integrity and psycho-spiritual integrity that have been sacrificed over the last half century drive for industrial modernism.

A final image of this nascent new age was the live U-stream feed last night (Sunday July 1) from in front of the Oi nuclear complex as it began its restart. Hundreds of anti-nuclear protesters drummed, danced, and shouted, “Against the Start Up”! Who were these people? Yes, some appeared to be those old leftist activists, but for the most part they were furita. Not worried about being at work at 9:00 the next morning, they danced and drummed and shouted well beyond midnight. Will this growing number of “drop-outs” be given the space to help build the new Japan or will they just grab it instead?