An Opportunity for Aung San Suu Kyi, President Obamaand You

This past week, Daw Aung San Suu Kyi – the leader of Burma’s parliamentary minority party the National League for Democracy, iconic Engaged Buddhist leader, and Nobel Peace laureate – broke her long and much-criticized political silence over the violence between Rakhine Buddhists and Rohingya Muslims in the Rakhine state, encouraging the government to take action to stabilize the region. She also added within the last day or so that the unrest is “an international tragedy.” 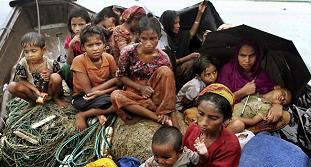 << “Rohingya Muslims who fled Burma to Bangladesh to escape religious violence, sit in a boat after being intercepted crossing the Naf River by Bangladeshi border authorities.” Photo by the Associated Press.

That being said, her rhetoric must be matched with clear and immediate action. In addition, the newly reelected Barack Obama is set to make history later this month by becoming the first sitting U.S. President to visit Burma. If this visit is to have any meaning beyond being an historic first, he will have much to do beyond simply showing up.

Here’s what you need to know: The Rohingyas are the 800,000 or so Muslims who live in the western part of Burma. They have lived in the area of the Rakhine state for centuries, with much immigration and flight between Burma and Bangladesh—the result of ever-changing political fortunes and conquest. British colonialists encouraged their immigration from Bangladesh in the nineteenth century to boost their agricultural yield in the region.

By 1939, the population of Rohingya Muslims (and tensions with local Rakhine Buddhists) had risen to such a degree that a commission of inquiry decided to close the border. Once World War II began, the British left the region, and terrible violence erupted between the two groups.

Thousands died. More bloodshed ensued when the Japanese arrived: the Rohingyas were supporters of the Allies - some of them even served as spies for the British - who had promised to support them in their goal of a separate Muslim state. Tens of thousands are believed to have fled to Bangladesh at this point. Following the coup of 1962, more were forced to seek refuge in Bangladesh and Pakistan due to the junta’s targeted attacks on the Rohingya community. In 1982, General Ne Win tightened a nationality law in the country and effectively (and illegally) rendered the Rohingyas a stateless people.

Today, the United Nations considers the Rohingyas “one of the most persecuted minorities in the world.” Right now there is considerable unrest and devastating violence - dozens are dead, whole villages have been razed, and over 100,000 have been displaced - in the Rakhine state as a result of what the Agence France-Presse identified as “the rape and murder of a Rakhine women and the revenge mob killing of 10 Muslims.”

When I saw Aung San Suu Kyi speak earlier this fall, she lamented that “the rule of law” had not been established immediately following the first instances of violence. But there is some clarity amidst the chaos: that same week Suu Kyi was in Washington, Human Rights Watch issued a report noting that “recent events in Arakan State demonstrate… state-sponsored persecution and discrimination [of the Rohingyas],” including murder, rape, and mass arrest. Then, this week, Reuters released a shocking special investigative report, which led with what was essentially a confirmation of HRW’s report:

The wave of attacks was organized, central-government military sources told Reuters. They were led by Rakhine nationalists tied to a powerful political party in the state, incited by Buddhist monks, and, some witnesses said, abetted at times by local security forces.

As if we should not already be troubled by all of this, one part of this sentence should grab the attention of Buddhist readers: “incited by Buddhist monks.”

In fact, just last week, Doctors Without Borders reported that Buddhist monks - not nominally Buddhist laypeople, but monks - were preventing their medical professionals from delivering assistance to sick, injured, and otherwise in need Rohingyas. In addition, Joe Belliveau, operations manager for Doctors Without Borders, noted that many of the organization’s staff members are now afraid to work in the area.

He said, “I’ve never experienced this degree of intolerance. What we really need is for people to understand that giving medical aid is not a political act.” Buddhist monks also recently blocked the opening of a Rangoon office of the Organization of Islamic Cooperation (OIC), a global body that wanted to open an office in the country in order to assist the Rohingyas and contribute to reconciliation efforts. The Democratic Voice of Burma has reported that the All-Arakanese Monks’ Solidarity Conference has called for the Burmese to identify Rohingya “sympathizers” so that they may be “targeted and exposed as ‘national traitors’” as well. (Reflecting on the monks’ behavior even before these incidents, Foreign Policy’s William McGowan referred to “Burma’s Buddhist chauvinism,” and the Bangkok Post‘s Assistant Editor Sanitsuda Ekachai stated bluntly, “This is racism, not Buddhism.”)

Whatever complications exist (and they certainly do) in this situation, there is absolutely no universe in which these sorts of things should not be categorically deplored in the strongest possible terms by someone in Suu Kyi’s position. Indeed, “the Lady” herself has unique power to effect outcomes here: many of these same monks are those who rose up against the junta in 2007’s “Saffron Revolution.” On September 22nd of that year, the day the monks began marching, their first stop was to Suu Kyi’s home, where she was then under house arrest. They offered blessings to her, but she, in effect, also offered her own blessing to their efforts.

If Suu Kyi were to publically ask the monks to cease and desist in their anti-Rohingya efforts now, there’s no guarantee that that would quell them. However, it would almost certainly deal them a crippling public relations blow, given the history of the relationship between “the Lady” and the Sangha. They would lose any implicit seal of endorsement from Suu Kyi, and with that undoubtedly much of their support.

Suu Kyi’s sacrifices on behalf of her country are some of the most selfless and inspiring acts this world has ever known. She has shown through staggering example what human beings are capable of when they set their sights on the highest ideals. For someone who has been so doggedly, movingly stubborn on behalf of others, her silence up to now has been very disappointing. She is quite right to point out that there has been violence on both sides, but wrong to “not take sides,” as she put it.

Even that language is somewhat problematic, for it implies a false equivalency: as imperfect and unskillful as the past actions of some may have been, there’s no denying that the Rohingyas, as a stateless people, have comparatively limited means (to put it mildly) by which to advocate for themselves. “Illegal immigration,” as she puts it, may well be happening and need attention; but she must also contend with the fact that even Rohingyas who have never crossed a border in their lives are not viewed as legitimate citizens by the Burmese government.

As her country’s moral touchstone - and very rightly so - “the Lady” has a special ability to help here, particularly with the monks. As a serious Buddhist practitioner herself, she might remind those monks who advocate fighting fire with fire of what it says in the Dhammapada:

Remembering their own Buddhist heritage might help the monks take the lead in a different way: as agents of reconciliation in a part of their country that has been plagued by hate and violence for such a terribly long time. “The Lady” might help them get there.
And President Obama might give her and the Burmese government a helpful nudge during his upcoming visit to the country. (It looks as though he will.)

Of course, he will need our encouragement to keep meaningful pressure on the country regarding the Rohingyas. Buddhist American leaders have already spoken out through two petitions (both of which I signed and helped with). You can make your voice heard through the petitions to President Obama that are currently circulating from Amnesty International (http://takeaction.amnestyusa.org/siteapps/advocacy/ActionItem.aspx?c=6oJCLQPAJiJUG&b=6645049&aid=518998) and United to End Genocide (https://secure3.convio.net/sdc/site/Advocacy?cmd=display&page=UserAction&id=761). (Each takes only a few seconds to fill out.)