The Buddha is known as a Religious Teacher. But a cosmologist? A Darwinist? That is how he comes through in a Buddhist text known as the Agga¤¤a discourse, one of the Long Discourses (Digha Nikaya). This is the view one gets from a recent research by Canadian Prof. Suwanda H J Sugunasiri, published in the latest issue of  Canadian Journal of Buddhist Studies (2013).  He finds   is a “historically and scientifically accurate characterization of the cyclical cosmic process   of Devolution (saüvañña) and Evolution (vivañña).” 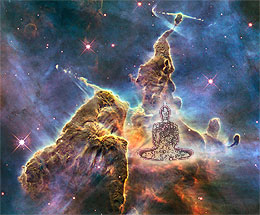 In Western Science, our universe has its beginnings in the Big Bang. In contrast to this  linear model, with  connotations of a first cause theism, it is,   for the Buddha, the Devolutionary phase, one phase of the cycle.

So how does Evolutionary phase that precedes it end?   When the ‘seven suns’ (as in a different Discourse) burns out everything – animal life, plant life, tallest of mountains, and the rivers and oceans dry up. The Big Bang is a big explosion spewing out heat.

It is in Biology and the  Darwinian Theory of Evolution that we read about the evolution of life in Western Science. But the Buddha introduces sentient life in relation to the earth. Thus the Buddha identifies three types of plant life. The last is rice, that we have in supermarkets today, but  an early variation, not forgetting that ‘all sentient beings are food-based’.

Enjoying the food, beings begin to be more complex. They come to be of different skin colour, and the bodies become coarser. In the end are ‘females and males’ (in that order) engaging in sex! If this marks the emergence of carnality, or passion, in humans, eating the food types earlier  marks ‘craving’. So the Buddha not only introduces the process of sentient evolution, but also sentient characteristics.

Marking this relatively shorter period of time, the Buddha   says that the sentient beings continue enjoying each of the food types ‘for a very long stretch of time’. No ‘evolution’ appears here. He’s clearly capturing the sub-phases.

“I was able to figure out the intent of the Buddha”, says Prof. Sugunasiri, “only by looking at the Text from the perspective of Western Science”. It was a breakthrough,  since the text has been   dismissed  by leading Western Buddhist scholars  as just  ‘satire’ or ‘parody’.

The first Beings that appear during the Devolutionary phase are called âbhassara Beings in the Discourse.  They are said to be ‘mind-based’ and ‘self-luminous’. While there is a traditional meaning for   the term âbhassara, Sugunasiri    takes it literally -  as   ‘hither-come-shining arrow’. What he sees here is a ‘photon’ – a ‘quantum of energy’, in the words of Einstein.  Based both in the Canon and Western Science, what we have is a bold venture in successfully insighting the Buddha’s insights through the lens of Western Science.

The  87 page article, “Devolution and Evolution in the Aggañña Sutta”   may be accessed  online, for free download on http://jps.library.utoronto.ca/index.php/cjbs .

-----------
Prof.  Sugunasiri  is Founder of Nalanda College of Buddhist Studies President of Buddhist Council of Canada. He may be reached at suwanda.sugunasiri@utoronto.ca