Why I have little sympathy for the Buddha tattoo tourist

Colombo, Sri Lanka -- The arrest and pending deportation of a 37-year-old British nurse, Naomi Coleman, from Sri Lanka for sporting a tattoo of a meditating Buddha on her right arm has once again raised the issue of tourists being woefully unaware of religious and cultural sensitivities in places they visit. 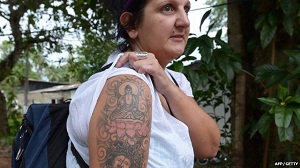 Coleman was still being held a day after her arrest and deportation order. She told the media that she had visited the country twice before and had had no problems regarding the tattoo. This time it was spotted before she could leave the airport just north of the capital, Colombo. A practising Buddhist, she said that she had visited other Buddhist countries such as Thailand and Cambodia without any trouble. She said her tattoo was a mark of respect.

Not many Sri Lankans would agree with her on that. For them, respect for one's religious beliefs can be expressed in different ways, but most certainly not with tattoos. Even in homes, religious statues are usually kept at the highest point and no other photographs or ornaments are hung above them. Recently a top Buddhist prelate requested that the country's president banned the publishing of Buddha images in newspapers.

Temples are considered spiritual sanctuaries. You make special preparations when you go into such places. You dress in white or in sombre colours, and wear attire below knee length.

It is not unusual for Sri Lankan temples frequented by tourists to keep white cloth at the ready to hand over to foreigners, so that they can enter appropriately dressed.

This is how religion is practised in this part of the world. It is not necessarily extremist or politically motivated: these traditions have existed for generations, regardless of who was ruling the country. There has never been a time when Sri Lankans felt it was OK to sport the image of Buddha as a tattoo. Many Sri Lankans would feel offended if they saw a Buddha tattoo, or the image of Buddha on a T-shirt or a pair of jeans, or being used as an ornament.

And this is not the first time that tourists have found themselves in trouble for being insensitive to religious customs here. In 2010, the US R&B star Akon was forced to cancel a concert when protests erupted over the use of a statue of the Buddha in one of his music videos. In 2012, three French tourists received suspended six-month jail sentences after they were apprehended kissing a Buddha statue in a disrespectful manner.

In March 2013, another British tourist, 42-year-old Antony Ratcliffe, was deported for having a Buddha tattoo on his arm. Ratcliffe too said that far from being an act of disrespect, his body art was a tribute to his Buddhist beliefs. Again, not many Sri Lankans would agree with that. On the contrary, they would take it as an expression of absolute disrespect.

If anything, these actions show that the tattoo bearers have not taken the time to read up on the country they are visiting and its customs. On the Foreign Office travel advice page on Sri Lanka there is no ambiguity on how the image of the Buddha should be treated.

"The mistreatment of Buddhist images and artefacts is a serious offence and tourists have been convicted for this. Don't pose for photographs by standing in front of a statue of Buddha," it warns.

Being aware of the customs of the country you intend to visit can save a traveler a whole load of trouble, as Coleman would attest.

Coleman, of course, identifies as a Buddhist. But what other such followers should realise when going to countries such as Sri Lanka is that tokens of faith that are accepted as normal or deeply symbolic of one's faith in the west, can elicit the exact opposite reaction elsewhere.