New Delhi, India -- The world’s first Global Buddhist missionary Anagarika Dharmapala and the most talked about man in India today and perhaps in the entire policy and decision making world the Prime Minister designate of India the iconic Narendra Modi, share something in common with each other. 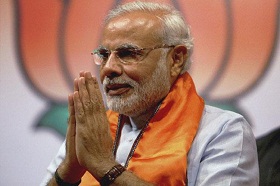 On going research indicates that Narendra Modi may have more in common with Anagarika Dharmapala than the sharing of a common birthday. As much as Anagarika Dharmapala saw over more than a century ago India’s claim to greatness and indebtedness of the world for giving the Message of the Buddha embodying an unique Dharma based on peace, non – violence and reverence for life of all living beings, Narendra Modi likewise sees the rich potential of the Buddha’s doctrine in promoting world peace and elevating the moral stature of India, because it was in India i.e.Buddha Gaya ( close to Varanasi – Modi’s new electorate) that Prince Siddhartha achieved enlightenment as Gautama the Buddha, and spent much of his 45 years after enlightenment delivering Dhamma discourses.

The Video clip of a speech (see below) made by Narendra Modi in 2010 at an International Buddhist Heritage Seminar held at the cultural capital of Gujarat, Vadodara amidst the presence of Dalai Lama and other religious dignitaries provides a valuable insight into Narendra Modi’s thinking on Buddhism and the increasing emphasis he can be expected to place in maintaining and strengthening ties between India and pre – dominant Buddhist countries in Asia.

An alliance between the largely Hindu India and predominantly Buddhist Asia may provide the long awaited counter weight to the hegemony we see in the conduct of the European Union (an Union of European Christian heritage countries) and the Organisation of Islamic Cooperation (OIC) ( An association of 56 Islamic states).

Sri Lanka has much to benefit from this new political development in India because its new leader though committed to the cause of Hinduism (Sanatana Dharma) is also a great admirer of Buddhism and very much conscious of the great contribution Buddhism has made in elevating the moral and spiritual stature of India through out the world, and its huge potential to influence humanity and global thinking in a positive direction.

The duration of the Video clip is 23.32 minutes. Narendra Modi speaks in both English and Hindi intermingling and translating his statement in English into Hindi.

To any one interested in studying the thoughts and ideas of Narendra Modi on religion this video clip provides an ideal opportunity.