The roots of intolerance and prejudice in Buddhism

London, UK -- Violence related to Buddhism in Sri Lanka and Burma often leaves observers with a sense of bewilderment; many Buddhist practitioners have resorted to violent means in the name of what is essentially a peaceful religion. This contradiction is somewhat easier to understand when viewed from two angles – East and West. 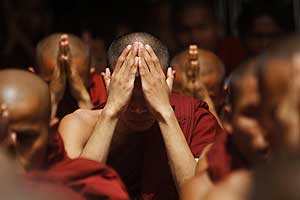 For the Asian Buddhist, the idea that the teachings of the Buddha could ever lead to hostility is simply dismissed. Buddhism is airbrushed from the scenes of violence and in its place is left only a threat to the nation, a threat to the culture and a threat to the religion.

The Western observer tends to assume that those committing these acts are not ‘real’ Buddhists. The original teachings have mingled with culture to such an extent as to become unrecognisable – dig beneath the culture, to the text, and there the ‘real’ message of the Buddha will be found. For the West, Buddhism has to be separated from its cultural environment. This is out of necessity – for it is assumed that Buddhism is not a ‘religion’ at all. It is a pristine ‘other’, standing alone and somewhat aloof from the messiness of the masses.

For the Asian Buddhist, the West can never culturally understand Buddhism (the West is ‘foreign’ – modern and corrupt). Whereas for the Western Buddhist, it is precisely these cultural accretions that obscure the real teachings. The East is naïve and lacks sophistication. Both sides, East and West, seek authenticity in Buddhism.

Buddhism has portrayed itself, and been described by Western commentators, as the religion untainted by ‘religiousness’ (dogmatism, violence, fundamentalism). It is the religion of choice for the compassionate, modern individual. Many believe that Buddhism has a pure history in which misdemeanors, carnage, war and hostility has been committed by everyone — except the Buddhist. This is why the recent violence in Sri Lanka and Burma elicits such shock.

In seeking the origins of these hostilities, we shouldn’t turn to the core textual tradition, even though some Buddhist groups may refer to particular texts to support their own positions. In the fundamental ideas of the Pali Canon, or the early Sutras of the Mahayana tradition, the teachings of the Buddha are based on tolerance and compassion.

The roots of intolerance might be found in the reaction of one Buddhist group to another. For example, this sectarian attitude surfaced in the emergence of the Mahayana Buddhism. The Mahayana identified itself in opposition to what it termed ‘Hinayana’ Buddhist groups. Although Mahayana is often translated as ‘Great Vehicle’ and Hinayana as ‘Smaller Vehicle’ – the term ‘hina’ actually means ‘inferior’, ‘low,’ ‘poor’, ‘miserable’, ‘vile’, or ‘contemptible’.

Evidence suggests that some Buddhist schools had uncompromising attitudes towards others. That intolerance was pronounced by the rise of Buddhism in the West (including the Asian ‘West’). There is an ongoing debate concerning which group is the most compassionate. The argument has been made that some Buddhist groups in Asia and elsewhere are using this ‘stick of compassion’ against Burmese Buddhists as a way of distancing the rest of the Buddhist world from the situation in Burma. Buddhist groups have long been vying for the claim of authenticity, an element of Buddhist history that could be at the heart of recent hostilities.

Even beyond disputes between differing factions of Buddhism, there is a broader sense of religious superiority. The notion of the superiority of Buddhism is often based upon a supposed scientific resemblance and methodology; Buddhism is better because it is viewed as scientific, rational. Because it is perceived as ‘better’, Buddhists go to war, discriminate against others, take Buddhism to be essential to national identity, and do things that we might find completely contrary to the Buddha’s teachings.

There is an historic pride in the fundamental goodness of the Dhamma which causes conflict and hostility. There are enough teachings in the Buddhist Canon that warn against these attitudes, but there are also many examples in Buddhist history where a strong sense of pride in one’s own tradition is supported. It is precisely where an attitude in which the most compassionate, the most Buddhist, the most traditional are valued – that intolerance in Buddhist culture comes into focus.

Dr Paul Fuller has taught Religious Studies at Universities in Southeast Asia, the University of Sydney in Australia and at Bath Spa University in the UK. His research interests include early Indian Buddhist philosophy and the Buddhist ideas of Aung San Suu Kyi. His book, The Notion of Ditthi in Theravada Buddhism: The Point of View (Routledge Curzon Critical Studies in Buddhism, 2004) explores the textual basis of discrimination and attachment in the Pali Canon.