Colombo, Sri Lanka -- In as much as two global religions Christianity and Islam are given leadership today by powerful countries based in the West and Middle East respectively, the time has come for the oldest of the three global religions namely Buddhism to be backed by a powerhouse to dispel the widely circulated myth that it is a weak religion sustained by relatively weaker countries in Asia despite Buddhism’s unmatched contributions to the sustaining of world peace, unqualified respect for the natural environment including reverence for the lives of all living beings and promotion of Ahimsa and non-violence as the basis of resolution of conflict. 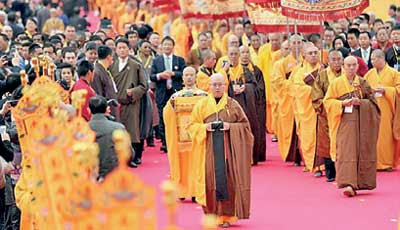 China’s new leadership is no longer doctrinaire Communist.   China’s President Xi Jinping has been quoted in the world press as saying that he believed China was losing its moral compass and he wanted the ruling Communist Party to be more tolerant of traditional faiths in the hope these will help fill a vacuum created by the country’s breakneck growth and rush to get rich. Xi, who was raised in Chairman Mao Tse Tung’s puritan China, is dismayed by what he sees as the country’s moral decline and growing obsession with money. Xi has expressed the hope that China’s “traditional cultures” or faiths - Confucianism, Buddhism and Taoism - will help fill a spiritual void that has allowed corruption to flourish.