Cananonizing a Saint May Not Be Saintly After All

Colombo, Sri Lanka -- Pope Francis is due to make a three-day visit to Buddhist-majority Sri Lanka with the highlight of the visit being the canonization of Joseph Vaz, an Indian born 17th century Catholic missionary who spent most of his life in Sri Lanka to help Catholics persecutedby the island’s Dutch rulers at the time. 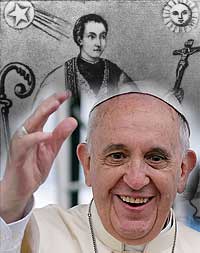 << Mainly Buddhist Sinhalese oppose the Pope's visit to the island to canonize Joseph Vaz as saint.

The canonization and Pope Francis’s second visit to an Asian country has created much controversy, which fortunately for the Vatican, has been drowned out by the intensity of the presidential election campaign in Sri Lanka. The election is scheduled for January 8th, just five days before Pope’s scheduled arrival in the island on January 13th.

About 70 percent of the Sri Lankan population are Buddhists, while the Catholics account for just 6 percent. But, they are a powerful minority that is well connected to international Catholic networks.

The haste at which The Vatican in close collaboration with the local Catholic Archbishop Cardinal Malcolm Ranjith, has arranged this visit setting aside many protocols and by-laws from Rome has added to Buddhist suspicions that this visit is designed to promote proselyting activities not only in Sri Lanka but also the South Asian region. The Catholic church however claims the visit is for promoting reconciliation and religious harmony, in Sri Lanka.

The AP news agency reported in September that Pope Francis has bend Vatican protocols bypassing the usual requirement that a second miracle needs to be confirmed before a canonization.  The Pope has bend the rules in the case of Vaz, to make him the first indigenous South Asian saint next month.

Another Vatican principle that has been breached by the visit is the requirement that a Pope should not visit a country a month on either side of a national election. The local Catholic Church hierarchy did appeal to the government not to call a presidential election in January. But, President Mahinda Rajapakse preferred to take his astrologer’s advice and fixed the date for 8th January. Both Cardinal Ranjith and The Vatican haveignored the requirement.

Vaz was born in the southern Indian state of Goa in 1651 and as a priest he founded the Oratory of the Holy Cross of Miracles in Goa. He chose to work in Sri Lanka to help fellow Catholics persecuted by the Dutch colonial rulers, who were Protestant Christians.
In April this year, the US-based Joseph Naik Vaz Institute in a petition to Pope Francis calling for Vaz’s cananonzation described him as a  “ missionary who made conversions and re-built an entire Church in Asia without the use of arms, or political and economic incentives” and pointed out that he is not an European, but, an Indian.

In fact, the Dutch were invited to the island by the King of Sri Lanka in the 17th century, when almost 150 years of Portuguese Catholic domination of the western coastal areas of Sri Lanka has had a devastating impact on the Sinhalese people and their religious practices.
Sociologist and historian Dr Susatha Goonatilake, in his book ‘A 16th Century Clash of Civilizations’ has documented in detail the atrocities committed by the Portuguese armies and their Catholic missionaries.

“Temples were burned or turned into Christian churches and valuable local texts were destroyed; local dresses and musical instruments were banned, children were taken from non-Christian parents and were forcibly baptized,” he noted.

“Every stage of their progress was marked by a rapacity, bigotry, cruelty and inhumanity unparalleled in the annals of any other European colonial power” argued renowned Buddhist scholar Dr G.P Malalasekare in his book ‘The Pali Literature of Ceylon’.

Buddhism has existed in Sri Lanka since 3rd century BCE, and in the 1st Century BCEthe Buddhist cannon ‘Tripitaka’ was written in Paliat Aluvihara in Sri Lanka. This document was instrumental in the spread of Theravada Buddhism to Southeast Asia.

The Portuguese who controlled the western coastal areas of the island between 1505 and 1658 has done the utmost to wipe out Buddhism from the island, which they regarded as pagan beliefs. Fired by their missionary zeal, Portuguese not only destroyed Buddhist temples and educational institutions, but killed hundreds of monks.

Thus by the beginning of the 18th century there were no senior monks left to ordain new monks. In 1752, the King of Sri Lanka sent emissaries to  Ayuthaya, the then capital of Buddhist Siam (Thailand)  asking for help. The King of Siam acceded to the request and sent a team of high-ranking monks led by Phra Upali Mahathera to Sri Lanka to reestablish the order of the sangha (monks). The Thai monks spent 3 years in Sri Lanka ordaining some 600 monks and 3000 novices.

Pointing out to apologies given by the Pope in the past two decades to Orthodox Christian in Europe, indigenous Canadians, the Jews and Africans for the church’s involvement in the slave trade, Sri Lankan social critic Shenali Waduge asks “Is it too much to ask that Pope Francis arriving to a majority Buddhist nation that has not objected to the canonization of Joseph Vaz, should extend the gesture by apologizing for the crimes committed by the Church to the Buddhists in particular, as well as to the Hindus and Muslims in Sri Lanka?”
Referring to such calls by Buddhists including the Buddhists grassroots activist movement Budhu Bala Sena, the Rome-based ‘Vatican Insider’ argued in a recent commentary, that “this climate of hostility and revenge is based on a historical memory that has been manipulated in order to spread hatred and this could be problematic for the Argentinian Pope’s pilgrimage(to Sri Lanka). Anti-Christian propaganda spreads easily via the web as well as via traditional mass media”.

The Catholics are also quick to point out that Pope Francis will be visiting the famous Madhu Church in Mannar in Sri Lanka’s Tamil-dominated north-west which was at one time occupied by the Liberation Tigers of Tamil Eelam (LTTE) a terrorist group crushed by the Sri Lankan military in May 2009.

Many Buddhists argue that the Catholic church supported and promoted LTTE for over 3 decades, especially in western countries. The Bishop of Mannar Rayappu Joseph is a well known sympathizer and supporter of the LTTE. Ironically, the Madhu Church has been built on top of ‘Pattini Devale’ a Hindu temple of the Tamils destroyed by the Portuguese. So this event is hardly symbolic of reconciliation in post-war Sri Lanka.

President Rajapakse and his brother Defence Secretary Gotabaya, have been very keen for the Pope to visit Sri Lanka, even though they are seen, especially abroad, as staunch Buddhist nationalists. Immediately after the announcement of the presidential elections, posters appeared all over Colombo with the picture of President Rajapakse meeting Pope Francis in Rome with captions projecting the visit as a symbol of reconciliation with the Pope coming to bless Sri Lanka.

The Catholic church leaders in Sri Lanka were upset over the use of the Pope’s image in electioneering and asked the government to pull down these billboards. Just this week, they have also has one-to-one meetings with the president and his main rival Maithripala Sirisena asking for guarantees of post-election peace to facilitate the Pope’s visit.
However, many Buddhists believe, though this is not articulated in the mainstream media, that the Catholic church may have a secret agenda in promoting Pope’s visit at such a crucial time where pre-poll violence is on the increase.

One school of thought is that Cardinal Ranjith, who is very close to the Vatican hierarchy,as well as the Rajapakse family, may have cut a deal with the government to get the Vatican’s support to get off the UN Human Rights Council’s agenda, war crimes allegation against the Rajapakse regime. In return the regime will facilitate a great propaganda coup for the church in canonizing  South Asia’s first saint, that will help to rid the church of the label  in the region of an European colonial institution.

“The decision to invite the Pope was done without any public consultation,” complains lawyer and Buddhist activist Senaka Weeraratne, reflecting concerns of many Buddhists in the country. “The Pope is on record expressing his glee at the inroads his religion is making into traditional Buddhist space (in Asia). Therefore, what is his game plan for Sri Lanka becomes a legitimate question?”