Buddhism Is Losing Its Voice in Asia

BANGKOK, Thailand -- The theme of this year’s 30th General Conference of the World Fellowship of Buddhists (WFB) was “Buddhism in the Time of Crisis”, but many disillusioned members of this premier Buddhist organization say it is the WFB that is in crisis. 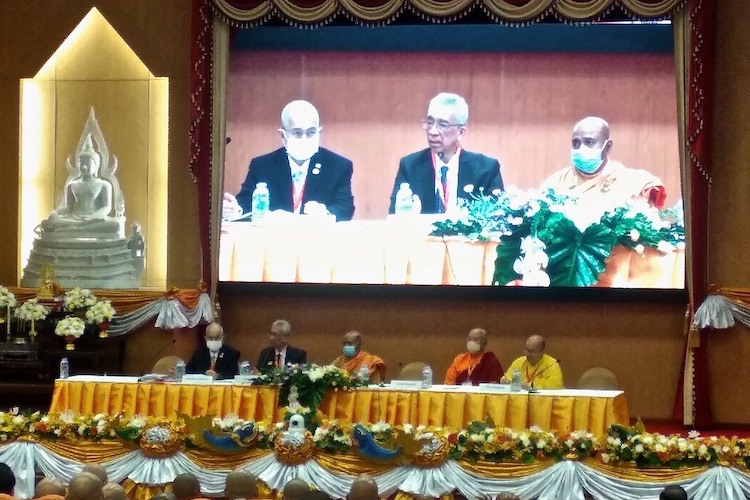 “The conference was poorly organized, and the theme of the conference was not addressed. There was no presentation from members about the challenges facing Buddhism in Asia at a time when these challenges are very serious, especially in Sri Lanka, Thailand, Cambodia and Myanmar”, one long-time Indian member of WFB, who wanted to be named Kumar, told IDN.

Many committed members blame the Thai national Phallop Thaiarry, its secretary general, for over a decade for many of WFB’s ills. One Malaysian member who left the WFB in disgust a few years ago told IDN “there is too much political manipulation and clambering for self-glory”.

At this year's general conference held on October 19 and 20 in Bangkok, Thaiarry told the participants that the Executive Committee (on October 18) had appointed him as the new President. As envisaged in the constitution, he will be appointing a new secretary general, which prompted one member to comment: “He runs the WFB like how Xi Jinping runs the CCP”.

WFB was founded by the world-renowned Sri Lankan Buddhist scholar Dr Gunapala Malalasekera in 1950, and its headquarters was initially in Colombo. His vision was to promote unity and amity among Buddhists for the well-being and advancement of Buddhism, particularly in Asia, as the continent was gradually coming out of the yoke of colonialism when Buddhism was significantly undermined in the colonies over centuries. The headquarters of the WFB was permanently moved to Bangkok in 1969.

The WFB has a three-story building in a prime location in the centre of Bangkok with an auditorium and a library, both of which are hardly used. The World Buddhist University (WBU), which is affiliated with it is also based there, but it does not conduct any courses nor research into contemporary Buddhism and its practices. Its Rector, Anil Sakya says the WBU is designed to be a coordinator of Buddhist ‘think tanks’, but he complained about a lack of support by member organizations.

Senaka Weeraratna, a Sri Lankan lawyer and Buddhist activist, says there is despondency among Buddhists across Asia today, and it is due to “lack of an effective institutional mechanism that can lend support when a Buddhist institution, Buddhist community or even a pre-dominant Buddhist nation is in danger”.

Weeraratna pointed out to IDN that traditional Buddhist countries such as Thailand, Myanmar, Sri Lanka, Cambodia and Laos are now under severe pressure to distance themselves from extending state patronage to Buddhism and erase their Buddhist country identity and embrace a secular identity. In contrast, “no such pressure is being applied to countries in other parts of the world such as the Middle East or the Catholic belt of Europe”.

Buddhism’s main appeal today, especially in the West, is its externally passive, non-confrontational and peace-loving nature. But, perhaps because of this, it does not have a powerful central authority such as the Vatican, Organization of Islamic Cooperation (OIC) or the World Council of Churches.

Many Buddhists, especially in South and Southeast Asia, believe that Dr Malalasekera’s vision for WFB was to build such an organization. Not confined only to fellowship.

Dr B.R. Ambedkar, the Indian Buddhist scholar and leader of the huge Dalit community in 1956, along with Dr Ambedkar, embraced Buddhism in public in Nagpur and said the same thing at the inaugural function of WFB in 1950. He said he wanted the WFB to go beyond fellowship and be more active in an interventionist sense in world affairs.  In fact, due to its earlier visionary leadership, today, WFB has got accreditation to the UN and its agencies, such as UNESCO and many other international bodies.

Weeraratna believes that the current leadership of the WFB should be more activist. WFB must identify threats to Buddhism and Buddhist communities and alert the membership of the WFB to these threats. “We see the lack of substantial networks of support driving threatened Buddhist nations or Buddhist communities into a sense of despair and hopelessness at times of an emergency,” he notes.

The theme of the WFB meeting was appropriate to the current situation, but there were hardly any speakers to address the issue. Two old monks from Japan and China spoke at the only plenary session giving the normal monotonous and unvarying sermon on the peaceful message of Buddhism without any reference to the current threats facing Buddhism. The only talk that was relevant to the challenges facing Buddhism today was a presentation by Anil Sakya, a Nepal-born Thai Buddhist monk.

He spoke about his work designing material for young people on sustainable development and issues of impermanence. But he said that Buddhists need to build networks to disseminate this knowledge through the WFB regional centres (there are 204 of these across the world), but he has got no support at all. He hinted that he would step down from his post when it comes for renewal soon.

Dr Kalinga Seneviratne, author of “Empowering from Within: Path to Protect Buddhism in Asia”, who prepared a consultancy report for Buddhist organizations in 2020 after extensive location research across Buddhist communities in South and Southeast Asia, was present at the WFB meeting. But he told IDN that his request for a speaking slot to present his findings and recommendations was denied by Thiarry.

“This organization is not interested in empowering Buddhists or discussing what is needed for that. It is an insult to the founding fathers of the organization, as WFB was set up for exactly that,” argues Seneviratne. “WFB badly needs a leadership change, but Buddhist passivity and customary inaction at time of crisis is standing in the way.”

“We need Buddhist think tanks in the modern era of Buddhism. Where are they?” asks Weeraratna.

WFB’s constitution has established the framework for it through the ‘standing committees'. But under the current WFB leadership, these committees have been emasculated such that they will not become a threat to the WFB leadership, according to insiders.

“These standing committees are a joke,” says Seneviratne. “They meet together at the general conference every two years and you never hear of them until the next one”.

This year the standing committees were not even allocated rooms to meet. They had to sit in the corner of the auditorium to come out with a statement of intent to be presented to the closing session. “This is not the way to discuss policy issues or activities,” complained Kumar. “Standing committees are designed to initiate and implement action plans, but these have been completely sidelined.”

IDN sent a set of questions to WFB for comment, but they did not respond.

In the past decade, many farsighted and proactive Buddhists have left WFB in disgust and formed their own regional organizations such as the Delhi-based International Buddhist Confederation and the Bangkok-based World Alliance of Buddhists.

Weeraratna says that today, there are rising challenges to Buddhism to the extent of undermining its very existence as the pre-dominant religion of many Buddhist-majority nations. “This hardly merits much attention in discussions of International Buddhist Organizations or International Buddhist Conferences. The solidarity that countries in Buddhist Asia showed towards each other in the distant past has greatly evaporated or become non-existent.”

“Few who may have a vision and ideas to tackle the crisis facing Buddhism in Asia were not given the floor to speak. Many were there merely for a photo opportunity, it seems; they lined up at the end of the meeting to congratulate Thaiarry and take a picture with him,” noted Seneviratne.

“This is the tragedy facing Buddhism in Asia,” he argues, who says his field research has shown that Buddhism is under attack across Asia by well-planned and well-funded evangelical groups.

“We need WFB to lead the mobilization of Buddhist communities to counter these movements. It's socio-economic, as well as cultural in nature that could be countered by empowering communities in a peaceful way. Sadly, I can’t see the current leadership of WFB being capable or interested in doing it”.
TOP