Rival child lamas grow up and into political storm

SHIGATSE, China -- In the cobbled paths and ancient courtyards of Tibet's Tashilhunpo monastery, a little boy stares out of pictures wearing a yellow, cone-shaped hat that mark his sect of Buddhism. 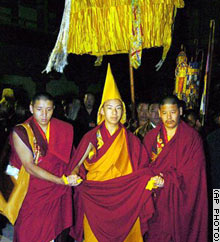 Gyaltsen Norbu has been groomed since childhood to prepare for his role as the 11th Panchen Lama, the reincarnation of the 10th and the second-most important figure in Tibetan Buddhism.

But while he received politically vetted religious training under the close watch of China's leaders, another boy is believed to have grown up under house arrest, dubbed the world's youngest political prisoner.

The first boy was chosen by the Chinese government. The second, Gedhun Choekyi Nyima, was anointed by the Dalai Lama, Tibet's spiritual leader and Beijing's nemesis since he fled to India in 1959 after a failed uprising against Chinese rule.

Ten years on, with the official Panchen Lama now a teenager and expected to take on a larger role, the Chinese government is being forced to come face-to-face with the question of acceptance for its choice in the towns and villages of Tibet, where many maintain a secret loyalty to the Dalai Lama.

"The 11th Panchen Lama is not a stooge," declared Bian Ba Ci Ren, an official in Shigatse, Tibet's second city tucked in the mountains four km (2.5 miles) above sea level.

"He is a genius, both in religious meaning and in his studies," he said.

But with the "Soul Boy" spending most of his childhood in Beijing, his acceptance has yet to be tested where it counts -- in the holy confines of the Panchen Lama's traditional seat, Shigatse's Tashilhunpo monastery.

Within the walls of Tashilhunpo, where security cameras keep watch and there are rumoured to be spies among the monks, Gyaltsen Norbu's picture is displayed at every shrine, alongside photos of his predecessors.

All are of equal size, all carefully draped with white prayer scarves in a sign of respect.

But outside in the bustling streets of Shigatse, there are signs the 11th Panchen Lama is little more than tolerated while his Dalai Lama-chosen rival is revered.

"In the countryside, everyone believes the Dalai Lama's choice is the right one. In the cities some think the government's choice is right," said an 18-year-old student.

Asked which boy he believes in, his answer is immediate. "Of course it's the Dalai Lama's choice," he said before hustling off, helping his mother by the elbow through the pilgrimage circuit that winds into the mountains behind the monastery.

In the narrow streets where tourists jostle with Buddhist pilgrims, shop after shop bears the smiling photo of the 10th Panchen Lama, a hero among Tibetans for criticising Beijing in a 1962 petition against efforts to wipe out Buddhism in Tibet.

While he spent more than a decade in prison and under house arrest for his efforts, the 10th Panchen Lama was later rehabilitated, making him a politically acceptable figure to both Tibetans and the Chinese government.

But pictures of both boys picked as his reincarnation are conspicuously absent, a sign of passive resistance against the government's choice.

"You don't see his photo being displayed in a way that is used for figures that are held reverentially," said one Western diplomat.

A seat of his own

That's a problem for a government keen to prove Gyaltsen Norbu's acceptance among the monks of Tashilhunpo before he turns 18 and is expected to take on a full leadership role within Tibetan Buddhism.

Officially, the monks at Tashilhunpo not only accept Gyaltsen Norbu but also repudiate the other boy, now 16.

"The 11th Panchen Lama recognised by the Dalai Lama doesn't exist," said Pingla, a monk and director of the Democratic Management Committee at Tashilhunpo, the government group inside every monastery that keeps religious life in check.

"We do not accept him so we don't display his photos at home or in the monastery."

But loyalties at Tashilhunpo once lay elsewhere.

Its chief abbot, Chadrel Rinpoche, was sacked and jailed for treason after notifying the Dalai Lama that his search team had identified Gedhun Choekyi Nyima as its choice.

That leaves an open question of just what kind of reception Gyaltsen Norbu would receive should the government impose his presence within the monastery.

"The refusal of monks there to accept him is really a big problem for the Chinese. Symbolically, he should be in the monastery," said Tsering Shakya, a Tibet scholar at Oxford University.

"He is wandering around all over China and he really has no seat of his own," he said.

But with the battle over the Panchen Lama a fight for the hearts and minds of Tibetans, the Chinese leadership is making clear that its choice must win out, giving Gyaltsen Norbu an ever-higher profile as he gets older.

Earlier this year, religious leaders were ordered to urge the faithful to show more support for the boy, and he met President Hu Jintao on his birthday in February, underscoring his importance to the leadership.

"The 11th Panchen Lama has the respect of the people in Shigatse and the monks or our monastery," Pingla said.

"He will come back to live here."